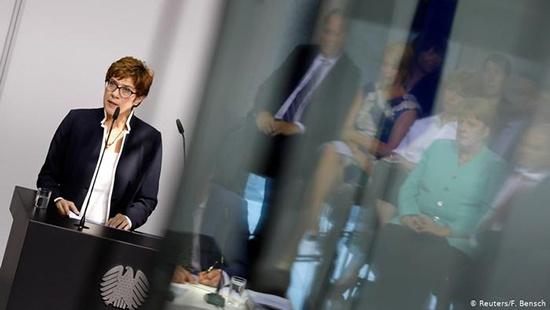 Germany’s new defense minister, Annegret Kramp-Karrenbauer, has told the Bundestag she wants a bigger defense budget. But simply throwing more money at the problem is not the solution, says DW’s Nina Werkhäuser.

When Defense Minister Annegret Kramp-Karrenbauer laid out her plans for the armed forces before Germany’s parliament on Wednesday, many lawmakers were unimpressed. That may in part be due to the fact that many members of the Bundestag were forced to cut short their summer holidays to attend her swearing-in ceremony. But the main reason will be her demand to significantly increase defense spending — even though the German military’s budget has already increased year by year, and now stands at €43 billion ($48 billion). Germany currently allocates the second largest share of its federal budget to defense.

Where will the money come from?

But Kramp-Karrenbauer is not satisfied with these figures. She reminded lawmakers that Chancellor Angela Merkel promised NATO that Germany would devote the equivalent of 1.5% of its annual gross domestic product to defense spending by 2024. This would effectively mean spending €60 billion per year, as an opposition MP pointed out to Kramp-Karrenbauer. The MP subsequently and justifiably asked her from where the government intends to take this money.

Meanwhile, Germany’s armed forces, the Bundeswehr, welcomes calls for greater defense spending. And so do military allies such as United States President Donald Trump, who has accused Germany of not carrying its own weight in NATO.

But Kramp-Karrenbauer’s calls for more cash are politically dangerous. As the leader of Germany’s conservative Christian Democratic Union (CDU), she is well aware that a larger defense budget automatically entails cuts elsewhere. And announcing cuts in the education sector, to climate protection measures or the roll-out of Germany’s internet infrastructure could alienate voters ahead of the 2021 parliamentary elections. What’s more, those elections could be called sooner than expected, given ongoing tensions with the CDU’s junior coalition partners, the center-left Social Democrats (SPD).

So perhaps Kramp-Karrenbauer should have more carefully appraised the situation before emphatically demanding greater defense spending. A lack of money is not the only issue plaguing Germany’s armed forces. The Bundeswehr also struggles with excessive red tape and overly complicated procurement procedures for spare parts and new equipment. Several of Kramp-Karrenbauer’s predecessors have already tried, and failed, to address these issues. The key question for her must therefore be: Which problems persist, and how can they be solved?

But after Kramp-Karrenbauer’s maiden speech in the Bundestag, it is doubtful she will actually get down to brass tacks. She has a lot to lose politically. She is eyeing the chancellorship and taking over as defense minister boosts her political clout. All this does not bode well for the Bundeswehr. It is unlikely Kramp-Karrenbauer will tackle its structural problems. Major reforms are politically risky, but they would help Germany’s troops much more than simply increasing the budget.