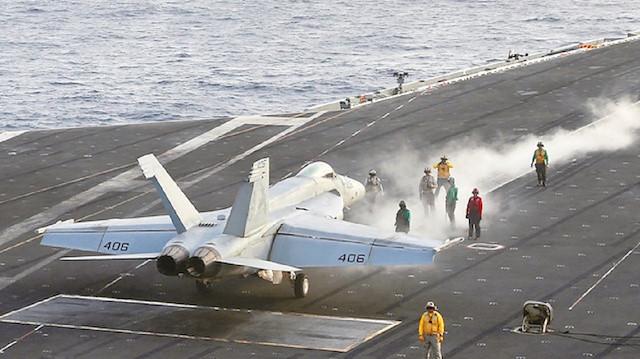 Yeni Safak – It is thought that the next target for these countries is the occupation of the energy basin of the Eastern Mediterranean.

The U.S., U.K. and their allies, who have over the last 50 years set the stage for “terrorism” and invaded countries under the pretext of “weapons of mass destruction,” have now set their sights on critical waterways and energy basins. The pretext to be used to justify the occupation will be the guise of “freedom of navigation.”

It is thought that the next target for these countries is the occupation of the energy basin of the Eastern Mediterranean.

According to military sources, the project, which is supported by the United Arab Emirates (UAE), constitutes a “serious provocation with no legal basis.”

The U.S. and U.K. took the first steps for the implicit occupation under the pretext of “unidentified” attacks and mutual detentions on tanker ships in the Strait of Hormuz. The U.S. Central Forces Command (Centcom) has announced that it has come up with a military operation called Sentinel, which aims to secure maritime routes in the Middle East.

A statement released by the Pentagon stated that “CENTCOM is working on the Sentinel international maritime operation to strengthen surveillance and security on key maritime routes in the Middle East to ensure freedom of navigation in light of the latest developments in the Gulf region,” with the goal of “to promote maritime stability, ensure safe passage and de-escalate tensions in international waters throughout the Arabian Gulf, Strait of Hormuz, the Bab el-Mandeb Strait and the Gulf of Oman.”

Following the U.S., Europe also took action as the U.K., who was seizing Iranian tankers in Gibraltar, and Tehran responded in kind, announced that a mission would be launched in the Strait of Hormuz on the grounds of the alleged safeguarding of trade routes.

British Foreign Minister Jeremy Hunt stated that certain talks were held on this issue and did not explain which countries would support such an operation.

However, support did come from the United Arab Emirates who announced via its Crown Prince Mohammed bin Zayed that his country attaches importance to the freedom of international and security in the Persian Gulf and the Middle East.

The next target of the U.S. and its allies in the invasion of the South China Sea, Hormuz and Bab al-Mandeb respectively could be the energy basin of the Eastern Mediterranean.