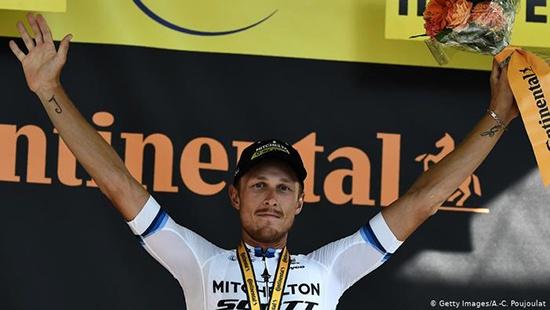 The Italian Matteo Trentin triumphed on the 17th stage as the favorites remain cautious ahead of a gruelling showdown in the Alps that will ultimately decide this tour. The suspense is intensifying.

Matteo Trentin was the first to get a glimpse of the dramatic backdrop of the Alps as he won the 17th stage on Wednesday. The 29-year-old Italian had left a breakaway group and celebrated his first Tour stage victory. Second was Kasper Asgreen from Denmark, about half a minute behind, followed by Belgian Olympic champion Greg Van Avermaet. The leaders in the overall standings around the wearer of the yellow jersey, Julian Alaphilippe, took it easy and crossed the finish line 20 minutes behind the stage winner.

Decision in the Alps

They cannot be blamed for this approach because what awaits beyond the horizon will be a torture of several days for the favourites that will ultimately decide this tour. On Thursday the peloton will tackle the royal stage. On the 208 kilometers (120 miles) from Embrun to Valloire there are three Alpine passes in the way: the Col de Vars, the Col d’Izoard (2360 meters) and the Col de Galibier (2642 meters).

On Friday, the Col de l’Iseran (2770) and the finish in Tignes (2113) follow. On Saturday, the stage culminates in the 33.4-kilometer final climb up to Val Thorens (2365).  “This is the showdown,” said Emanuel Buchmann, referring to the penultimate day of the tour. The suspense is intensifying and for the 26-year-old it will determine whether he can keep the podium in his sights. As Buchmann put it: “If you have a break-in, you really lose time”.

Favorites up close and personal

Only 2:14 minutes behind sixth place, Buchmann even maintains a chance of overall victory. Names like Thibaut Pinot (+1:50 minutes) and Geraint Thomas (+1:35 minutes) lurk in front of him in pursuit of Alaphilippe’s yellow jersey. Rarely have the gaps between the favourites been so small at this late stage of the Tour. But that was probably exactly the calculation of the route planners, who plotted the Alpine stages as late as possible into the stage plan to generate this kind of finale. It promises to be gripping.