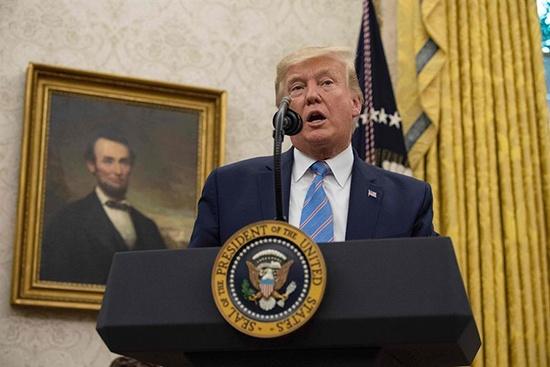 US administration had authorised $8bn sales without approval of lawmakers.

US President Donald Trump vetoed congressional efforts to block $8bn in arms sales to Saudi Arabia and the United Arab Emirates that his administration had authorised without the approval of lawmakers.

The veto on Wednesday comes after both the Senate and the House of Representatives passed resolutions to halt the arms deals.

The State Department bypassed Congress to push the sales through by declaring an emergency, citing growing tensions with Iran.

Trump said the blocking the deals would damage “the credibility of the United States as a reliable partner”.

“This resolution would weaken America’s global competitiveness and damage the important relationships we share with our allies and partners,” the White House said in a statement late on Wednesday.

Lawmakers can overturn the president’s veto with a two-thirds majority in the House and the Senate, but Trump appears to have enough support in both legislative chambers to prevent that outcome.

Congresswoman Debbie Dingell, a Democrat from Michigan, was quick to denounce the veto late on Wednesday, calling on lawmakers to act against it.

“These arms deals with Saudi Arabia do not serve US interests,” Dingell wrote on Twitter.

“There is already a terrible humanitarian crisis in Yemen, and we cannot be complicit in worsening the crisis. The Trump Administration can no longer overstep its authority. Congress must override the veto.”

US laws give Congress the power to halt major arms sales to foreign countries. The decision to sidestep the legislature caused an outcry on Capitol Hill, where many lawmakers, including some of the president’s allies, denounced the questionable use of an emergency declaration.

The sales were forced through during a time of growing scepticism in Congress towards the US alliance with Saudi Arabia after the murder of Washington Post journalist Jamal Khashoggi and the mounting civilian death toll from the Saudi-led war in Yemen.

Coupled with anger at Riyadh, legislators were furious over the administration’s failure to follow the normal process for arms sales. Both chambers of Congress held hearings to question administration officials about the emergency declaration.

Earlier this month, Republican Senator Ted Cruz, a staunch Texas conservative who is close to Trump, decried the State Department’s decision to bypass Congress, urging the administration to “follow the damn law and respect it”.

“I have to say I agree with the concerns that have been expressed in this hearing on both sides of the aisle,” Cruz said at a hearing in the Senate.

Congress has been pushing to hold Riyadh accountable for the death of Khashoggi, who was killed by Saudi government agents at the country’s consulate in Istanbul last October.

Trump ignored a deadline mandated by the Global Magnitsky Act, a US human rights law, to report to Congress on whether Saudi Crown Prince Mohammed bin Salman was involved in the murder.