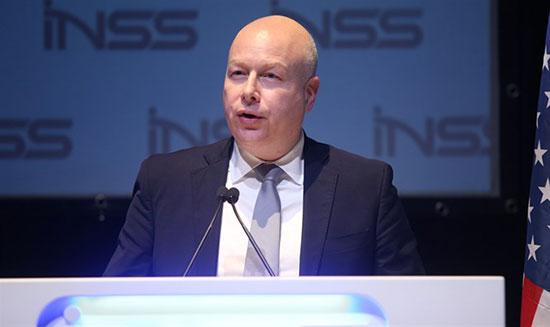 Jason Greenblatt and senior Trump adviser Jared Kushner have spent two years developing the plan — made up of political and economic components — which they hope will provide a framework for renewed talks between Israel and the Palestinians.

Greenblatt said Trump hoped to make a decision “soon” on whether to release the closely held plan before or after an Israeli election in September. Kushner and Greenblatt have not said if it calls for a two-state solution, a goal of past peace efforts.

The Security Council has long endorsed a vision of two states living side by side within secure and recognized borders. The Palestinians want a state in the West Bank, east Jerusalem and Gaza Strip, all territory captured by Israel in 1967.

“If that were achievable, I think we’d already have peace. It’s not achievable,” Greenblatt told reporters, adding the “60-or-so”-page plan “does not contain a one-state solution.”

Greenblatt told the 15-member Security Council that peace could not be achieved “by fiat of international law or by these heavily wordsmithed, unclear resolutions,” triggering strong rebuttals from several members, including Germany, Russia, Britain, France and Indonesia.

“For us, international law is not menu a la carte,” Germany’s U.N. ambassador, Christoph Heusgen, told the council. “There are other instances where U.S. representatives here insist on international law, insist on the implementation of U.N. Security Council resolutions, for instance on North Korea,” Heusgen said.

France would support any peace effort “so long as this aligns with the approach that we have set out together, so long as this adheres to international law, specifically all resolutions of the Security Council,” French U.N. Ambassador Nicolas de Riviere said.

Greenblatt later told reporters that he understood his remarks might have irritated some people.

“But there’s nothing that I said that in our view wasn’t truthful and I think that everything that I said is a necessary step to eventually airing the plan and, if there’s traction, getting to results,” he said.