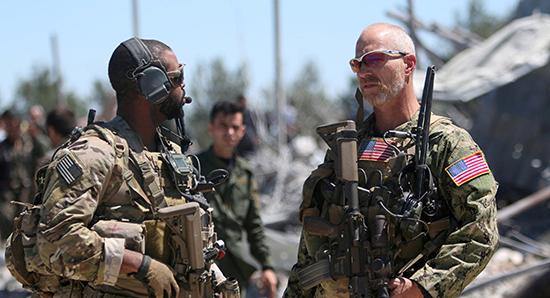 The US military has decided to pull a group of Navy SEALs from Iraq over  conduct that caused their commander lose “confidence in the team’s ability to accomplish the mission,” a rare decision that sources said had to do with the soldiers’ abuse of alcohol.

US Special Operations Command said in a statement Wednesday that the elite platoon was flown back to their base in San Diego upon an order by the commander of the task force, Major General Eric T. Hill.

“The commander of the Special Operations Joint Task Force Operation Inherent Resolve (in Iraq) ordered the early redeployment of a SEAL Team platoon to San Diego due to a perceived deterioration of good order and discipline within the team during non-operational periods,” read the statement by USSOCOM.

“The Commander lost confidence in the team’s ability to accomplish the mission,” the statement added, without spilling more details.

Meanwhile, a source within the US Defense Department revealed to CNN that the team was sent home after the soldiers came under scrutiny for their alleged abuse of alcohol during downtime, in breach of general orders troops have to abide by while deployed overseas.

The unnamed Pentagon official claimed there was no evidence the soldiers had consumed alcohol on missions or used drugs.

The Pentagon has launched a fact-finding investigation into the matter.

The USSOCOM said that “commanders have worked to mitigate the operational impact” of removing the SEAL platoon from Iraq.

“Naval Special Warfare insists on a culture where ethical adherence is equally important as tactical proficiency. Good order and discipline is critical to the mission — the loss of confidence outweighed potential,” she added.

The USSOCOM said in its statement that all Pentagon personnel “are expected to uphold proven standards and to comply with laws and regulations. Alleged violations are thoroughly investigated.”

The US invaded Iraq in 2003, claiming that then-Iraqi dictator Saddam Hussein possessed weapons of mass destruction and sought to use them against the US.

Combat forces pulled out of the country in 2011, nominally ending the war. However, thousands of American and other troops remain in the country to allegedly provide logistics and training to Iraqi forces.

Many politicians across Iraq’s political landscape have questioned the foreign military presence in the country over the years. Calls for a withdrawal of foreign forces have grown following the defeat of the Daesh terrorist group in Iraq in 2018.

The news comes amid increasing allegations of misbehavior by Navy SEALs and other Special Operations Forces personnel deployed to other countries.

The USSOCOM’s senior enlisted adviser told reporters that the force had conducted a congressionally mandated review, refusing to admit that there was a systematic problem that needed to be addressed.

“Do we have an issue? No, we have challenges, we have fraying, but are these things systemic? No, after a hard look,” US Air Force Chief Master Sgt. Gregory Smith told reporters at the Pentagon on Wednesday. “Is there room for improvement? Is any one ethical breach too much? Yes.”

US soldier gets drunk, steals taxi in South Korea

The decision comes days after an American soldier stationed in South Korea assaulted a taxi driver and stole the vehicle after getting drunk.

Local police had to use taser guns in order to subdue and arrest the soldier, who is now facing “charges of Assault, Robbery, DUI, and underage drinking.”

Four-star General Rober Abrams, commander of US Forces South Korea (USFK), said in a tweet that American troops in the East Asian country are “guests” and “ambassadors who represent our country on and off duty.”

The incident came nearly a month after the general temporarily lifted a midnight curfew for service members in South Korea for 90 days to see whether the soldiers can behave themselves.

The curfew was introduced after “two high-profile rape cases involving American soldiers,” according to the USFK.

American forces also stand accused of misbehavior and violent crimes in Japan and a number of other countries.