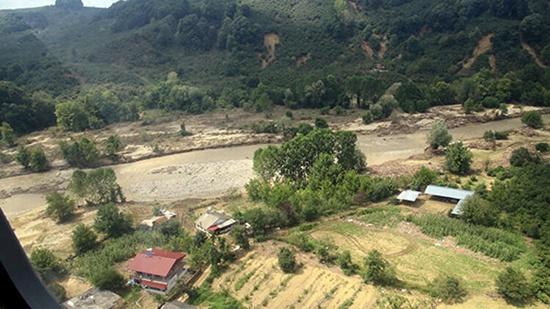 Hit by flash floods and landslides, the governorship of Düzce declared the northwestern province, a disaster-prone area on July 24.

Preliminary damage assessment in the worst-affected Cumayeri and Akçakoca districts, were sent to the Disaster and Emergency Management Authority (AFAD), the governor’s office said in a statement.

It noted that flash floods and landslides caused by heavy rainfall last week affected common life in Düzce, located on the Black Sea between the capital Ankara and Istanbul.

Therefore, the affected residents were officially considered disaster victims. The statement added that the assessment efforts would be conducted in coordination with the provincial government offices.

At least five out of seven people missing from Akçakoca and Cumayeri districts have been reported killed in the flash floods, according to the governor’s office.

A total of 232 people have so far been rescued while search operations continue to trace the missing.