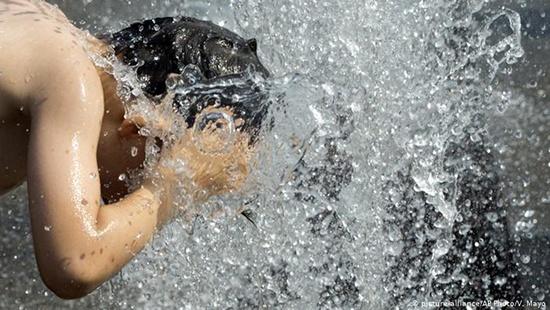 Extreme heat was felt across Europe, from the United Kingdom to Luxembourg, and in cities like Paris, which suffered its hottest day ever. Germany recorded 42 degrees Celsius, its highest temperature since records began.

Residents across Europe suffered from a second day of record-setting heat on Thursday, as the second heat wave of the summer continues to bake the region.

Hot and dry air, originating from northern Africa, trapped between cold stormy systems, was the culprit for the miserable conditions in northern Europe, which hit the United Kingdom, France, Belgium, Luxembourg, Switzerland, the Netherlands and Germany.

Germany recorded its highest temperature ever, measuring 42.6 degrees Celsius (108 Fahrenheit) in the northwestern town of Lingen, according to the German Weather Service.

Temperatures in Paris were the highest ever, reaching 42.6 Celsius as tourists and residents alike sought relief in public fountains. Authorities and charity workers handed out water and sunscreen to homeless people and opened day centers for them to rest and shower.

The extreme heat caused travel disruption throughout France, where authorities urged travelers to avoid public transit and stay home. The hottest temperature recorded nationwide was 46 degrees Celsius in Verargues, a village in the south, which smashed the previous national record of 44.1 degrees in the Gard region in 2003.

In the UK, temperatures stayed below 40 degrees Celsius, with 36.9 degrees recorded at London’s Heathrow Airport. It was a record temperature for July, but still below the UK’s all-time high of 38.5 Celsius.

Transportation was also disrupted, as trains were canceled or forced to slow down to prevent tracks buckling in the heat.

The Netherlands and Belgium saw temperatures rise to 40 degrees Celsius. In Belgium, it was the hottest day since the country started keeping records in 1833.

“New national record: 40.6 C in Kleine Brogel! Is this for real!” said David Dehenauw, head of forecasting at the country’s Royal Meteorological Institute.

In the port of Antwerp, police arrested two men who had called emergency personnel after they locked themselves in a container while allegedly picking up drugs.

In the Netherlands, a government health institute issued a warning for high levels of smog in the densely populated cities of Amsterdam and Rotterdam.

Air quality will be “extremely bad,” the Dutch government warned, due to light winds that cannot blow away pollution.

Prior to that, the Dutch national heat record had stood at 38.6 degrees, which was recorded in the summer of 1944.

Meteorologists predict the the intense heat will drop on Friday and Saturday across the region.

The inferno and the mystery ship