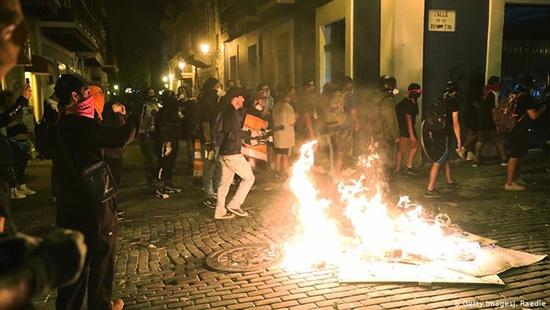 Two years ago, Hurricane Maria devastated Puerto Rico. Now, a hurricane of political will has forced out the island’s governor. Following peaceful mass protests with hundreds of thousands of people taking to the streets, Governor Ricardo Rossello has announced he will step down on August 2.

The last time this US territory of 3.2 million people saw mass protest of this kind was after Hurricane Maria, when the United States failed to send help.

To fully understand Puerto Rico’s political upheaval, you need to understand what it means for Puerto Rico to belong to the US. The island does not enjoy the rights of a proper US state: While the people of Puerto Rico are US citizens who pay US taxes, they do not have voting rights in the Electoral College, which selects the president. What’s more, they are represented by a single representative in Congress who has no voting rights

The island’s citizens turned out to protest after Rossello was accused of misappropriating public funds for private use. This frustration was compounded by the fact that Puerto Rico has been suffering a debt crisis for years.

Rossello, his former economic minster and other members of his party had spun a web of corruption that came light when transcripts of their text chats were leaked to the press. The conversations, amounting to some 900 pages of text, included the governor and 11 of his allies — among them high-ranking Puerto Rico lawmakers.

The participants discussed more than just how to embezzle public funds and manipulate public opinion. What incensed Puerto Ricans the most was the insolent tone of their chats. Rossello and his cronies made obscene, homophobic and misogynistic remarks, calling former New York City Council Speaker Melissa Mark-Viverito — a high-profile ally of one of Rossello’s political opponents — a “whore.” They even went so far as to ridicule victims of Hurricane Maria.

Rossello reportedly also undermined the independence of the judiciary by naming judges for Puerto Rico’s top court that were known to sympathize with him and his government.

So while Rossello could face legal action over the misappropriation of public funds and corruption, many Puerto Ricans reject him for moral reasons. The recent protests have brought together islanders from all political camps who are fed up with the ruling political class.

It’s a farcical situation. Just two years ago, Rossello — who had the bipartisan backing of US lawmakers — was seen smiling for the cameras as President Donald Trump tossed rolls of paper towels to victims of Hurricane Maria. Today, Rossello is shunned by US lawmakers, Trump and even the Puerto Rican representative in Congress — all of whom have publicly urged him to resign. Trump himself is no stranger to offensive and sexist remarks. And he, too, has nominated like-minded judges to the Supreme Court. But apparently, in Puerto Rico, Trump finds such behavior unacceptable.

Hydroxychloroquine: How WHO and The Lancet Let a Little-Known Company Twist Them Around Its Finger