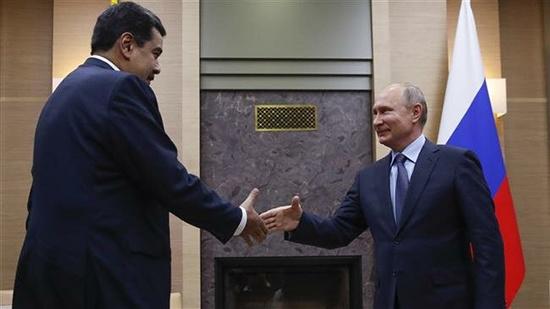 The United States has threatened Russia with new sanctions over its support for Venezuelan President Nicolas Maduro shortly after announcing punitive measures against several individuals and groups for their involvement in an emergency food program.

The White House representative for Venezuela, Elliott Abrams, said the new sanctions would be announced against Moscow on Thursday.

“The pressure will continue,” he said. “On Russia, we are still thinking about what sanctions to apply, individual or sartorial.”

Abrams said he thinks the pressure has had a “fairly dramatic” effect on Caracas.

The administration of US President Donald Trump— who was quick in recognizing Venezuela’s opposition figure Juan Guaido as the country’s legitimate leader earlier this year— has actively been undermining Maduro’s government in a bid to replace him with Guaido.

It has levied several rounds of sanctions against the country, confiscated Venezuela’s state oil assets based in the US which have been channeled to Guaido.

The Trump administration has repeatedly called on Moscow to withdraw its support for Maduro. Russia, however, has rejected the request, saying Washington was trying to instigate a coup in defiance of international law.

The US had already backed a coup attempt against the government of Maduro in April.

Guido, the speaker of the now-defunct Venezuelan National Assembly, orchestrated the coup against the government on April 30, during which a small group of armed troops accompanying Guaido clashed with Venezuelan soldiers in the capital, Caracas.

The putsch quickly petered out, though, and some 25 renegade soldiers sought refuge at the Brazilian embassy in Caracas.

As part of many desperate attempts against Maduro’s government, Washington has attempted to destroy a military-run emergency food program, which is feeding millions of people across the country.

The government in Caracas launched the plan in 2016 in response to a severe shortage of food, as the oil-rich nation has been struggling under severe economic contraction, hyperinflation, power cuts, and a general shortage of basic items as a result of harsh US imposed economic sanctions.Under the program, the government sells boxes of food that include products such as rice, pasta, oil and powdered milk at subsidized prices.

The US, however, has accused Caracas of “stealing food from the poorest Venezuelans” through the program, known by its Spanish acronym as CLAP.

On Thursday, the US Treasury Department announced sanctions against ten individuals and 13 groups connected with the food subsidy scheme.

“Treasury is targeting those behind Maduro’s sophisticated corruption schemes, as well as the global network of shell companies that profit from” the country’s military-controlled food distribution program, said Treasury Secretary, Steven Mnuchin.

Maduro on Thursday called the sanctions a sign of “desperation” by “the gringo empire.”

“Imperialists, prepare for more defeats, because the CLAP in Venezuela will continue,” Maduro said, using the Spanish acronym for the program. “No one takes the CLAP away from the people.”

Venezuelans are suffering from a lack of basic necessities under US sanctions. According to United Nations statistics, a quarter of Venezuela’s 30-million-strong population is in need of humanitarian aid.

At least 3.3 million people have fled the country since the end of 2015, the data show.