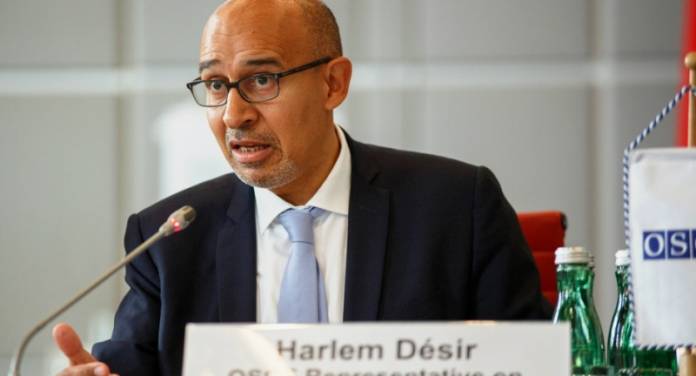 Turan.az-The OSCE’s media watchdog urged on Thursday steps by some member states, such as Azerbaijan, to silence independent media were unacceptable, and that the leaders should respect and protect critical role of journalists.

“Situation in Azerbaijan is for us of great concern,” OSCE Representative for Freedom of the Media Harlem Desir said in his first appearance before Congress in Washington D.C., TURAN’s U.S. correspondent reports.

“We really wish that Azerbaijan would consider its OSCE commitments in regards to independent media and different voices – ones who have the possibility to express their view of the situation of the country,” Desir said during a hearing organized by the Commission on Security and Cooperation in Europe, also known as the Helsinki Commission.

In his question Rep. Alcee L. Hastings, D-Fla., who chairs the Commission, reminded that Azerbaijan has been positioned among the largest jailers – second after Turkey in the OSCE region – of journalists by independent media watchdogs.

What is particularly alarming, he said, is that Azerbaijan “is now a country without a single independent TV, or print, or radio outlet. It has escalated its repression of online media, of blocking virtually all Azeri language independent internet news outlets, and increasing legal restrictions on online information.”

The OSCE respresentative also mentioned his plan to travel to Azerbaijan. The issue, he sad, has been discussed with Azeri MFA. “We agree on the principle, but we still wait for concrete disposition regarding this visit.”

The OSCE media watchdog has been raising many cases of imprisoned of prosecuted journalists with the authorities in Baku. Some have been released and but most of them are not, Desir reminded.

Journalist Afghan Mukhtarli’s case has been “a strong issue of concern for us”, he said. “[Mukhtarli] was leaving abroad, was abducted in Georgia and reappeared as a prisoner in Azerbaijan.”

“No journalist in OSCE region should be imprisoned because of their work,” Desir added in his testimony. Journalists are the targets, but fundamentally, what is under assault is the role of the media in democracy.

“Good journalism absolutely critical to a well-functioning and healthy democracy… when you restrict the ability of journalists to do their jobs, it is citizens who suffer,” added Congressman Hastings.

According to the OSCE records, in the first six months of 2019, two journalists have been killed and an additional 92 attacks and threats-including one bombing, three shootings, and seven arson attacks-have targeted members of the media.

Desir also addressed the issue of threat posed by disinformation and online content designed to provoke violence and hate in the region.