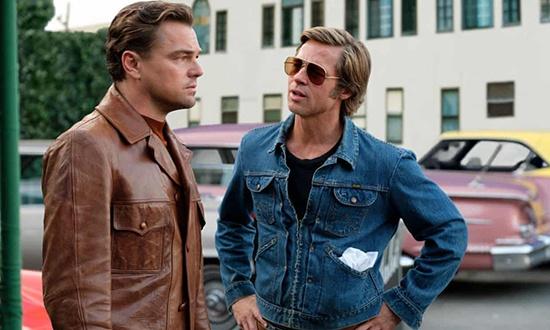 It’s 1969, and Los Angeles doesn’t look like it used to. Psychedelic flyers wallpaper the telephone poles advertising love-ins and happenings, dirty pictures have started getting proper red carpet premieres and storefronts tout ever-more-sophisticated TV sets. The strong, silent types that used to people the streets have been replaced by druggies and weirdos. Quentin Tarantino’s latest film, Once Upon a Time in Hollywood, wedges itself between a fading past and the future toward which it rapidly hurtles, training its camera on a few characters caught in the crossfire. The audience can perceive the vicissitudes of the years in a microcosmic form with just one moment, too, in the clothing, music and production design.

California set the scene for the social upheavals of the counterculture era, when surfaces offered a simple and immediate way to tell the establishment squares apart from the free-loving, free-spirited youth. These groups, the generational ideals they symbolize and their collision all hover around the film’s central theme, with Tarantino triangulating the turning point between the old and new. He communicates these ideas through their choices in scenery, props and garb that identifies a person as a member of one cultural camp or the other. In the entertainment industry, where appearance means everything and being seen by the public as passé represents a fate worse than death, looking the part can mean the difference between success and failure.

Rick Dalton, the journeyman actor portrayed by Leonardo DiCaprio, worries he may have an image problem. A staple of TV serials during the 50s now facing obsolescence as tastes morph, he is scraping by on guest spots casting him as a novelty, a reference to himself. The film joins him as he prepares for once such gig, pairing a leather jacket the color of chocolate milk with a rotation of polyester turtlenecks. It’s tough guy attire with a bit of actorly flair, precisely the sort of thing a man would wear to set to let his castmates know he’s a performer, but he’s no sissy. There’s a thin gold chain to go with this ensemble, and one gets the sense that it’s Rick’s lone concession to the fashion trends drifting toward the flamboyant and ostentatious.

Rick gets a talking-to early on from a talent agent (Al Pacino) warning him that obscurity awaits unless he catches up with the times and jet-sets to Italy for a new career in so-called “spaghetti westerns”. He gives in near the end of the film’s second act, at which point the script jumps ahead six months and finds Rick transformed. His sojourn in cinema Italia brings him into his own present; on the plane home, Tarantino drops in a glorious reveal shot panning up over Rick’s newly grown sideburns and his neckerchief, announcing him as a new man with his finger on the pulse. He’s adapting, and that starts with his image – he brings back a new Italian wife to his Hollywood home, the pride and joy that he sees as an un-severable tie to the A-list.

For contrast with Rick’s resistance to his own aging, Phillips outfitted the many hippies with loose, skimpy, skin-baring clothes to emphasize the unbothered freedom these burnouts enjoy. Rick barks that he hates hippies as he and his stunt double/driver/best pal, Cliff Booth (Brad Pitt), drive by a gaggle in tie-dye and denim. One of them gets more to do than the others, a smiley sexpot named Pussycat played by Margaret Qualley. She spends the film in mini denim shorts, a crocheted halter top and bare feet – Tarantino’s camera, unsurprisingly, loves her. They rove around doing not much of anything, just selling LSD-dipped cigarettes and scouring dumpsters for free food. Their behavior baffles, frightens and enrages Rick.

Tarantino’s film draws a clear dichotomy between the old guard embodied by Rick and the kids coming up from behind, which leaves Cliff in a curious middle ground. He’s a tougher character to read; aloof and easygoing, he’s more amenable to hippies, while still a part of Rick’s generation. Cliff starts the film embracing the new aesthetics, already having grown sideburns and rocking a Canadian tuxedo. But his most significant look, the poster-friendly one, deals him a faded T-shirt and open Hawaiian shirt to go with it. It’s an emblem of taking it easy, of not caring about whether it comes off as tacky or cool. (Which, incidentally, is the key to pulling it off.) That’s Cliff in a nutshell, drifting through his life and his time, more open-minded than his contemporaries and not entirely trustful of the young guns.

Once Upon a Time in Hollywood takes epochal changeover as its primary focus, clocking the beginning of one era as it kills the one that came before. My review out of the Cannes film festival focused on how the film fits into Tarantino’s filmography as a palpably late-phase work, offering an artist getting along in years the chance to reflect on a world that’s changing all around him. One could venture that he shares Rick’s unease with his time, a sudden unfamiliarity with the terrain over which he once presided as king – the unsettling feeling of looking around and not recognizing anyone anymore.