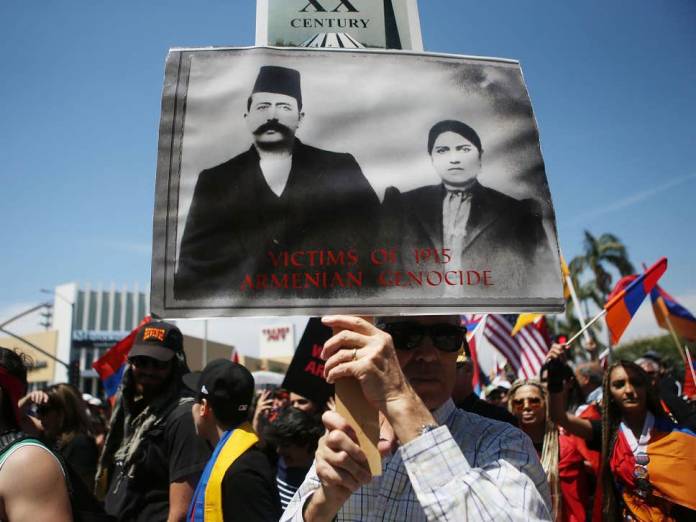 Many believe the Jewish Holocaust was planned by the Nazis at a Berlin lakeside villa at Wannsee on 20 January 1942. Most historians still think the Armenian Holocaust was hatched up by the Ottoman Turks in Istanbul in 1915. Of course, we’ve long known that the mass slaughter of Europe’s Jews began the moment the Germans crossed the Polish border on 1 September 1939 – and carried on across the Soviet Union in 1941, seven months before Wannsee.

But now, almost incredibly, we discover that the liquidation of Christian Armenian men, women and children was first instigated on 1 December 1914 in the far away city of Erzurum – not on 24 April 1915, when Armenians commemorate the first killings of the genocide perpetrated against them. And that back in that fatal December month, the Turkish “Special Organisation” – the Ottoman equivalent of the later German SS and Einsatzgruppen – organised the immediate liquidation of Armenians “liable to carry out attacks against Muslims”.

We already know the terrifying statistics of the two genocides. The Armenian Medz Yeghern (Great Crime) destroyed a million and a half souls. The Jewish Shoah (Holocaust), which began less than a quarter of a century later, destroyed at least six million souls.

The Turks have never, to this day, accepted their responsibility. The Germans have. We still respectfully record how the Turks “hotly dispute” their genocide of the Armenians. We always – rightly – condemn the right-wing Europeans who deny the Nazi genocide of the Jews.

But it is that fine Turkish historian Taner Akcam, in his self-imposed American exile, to whom we this month owe the historically seminal revelation that the Armenians were targeted for death exactly 31 days after the Ottoman Empire entered the First World War on 31 October 1914. The first Armenian victims were only men – the bloodlust to kill their families would come later – in the provinces of Van and Bitlis. But they prove how deeply this war crime was embedded in the countryside of eastern Turkey, in the cities of the periphery rather than the capital.

And thanks to Akcam’s research in hitherto unexplored prime ministerial Ottoman archives, we find, for the first time, a secret order from the local Erzurum government headquarters to the governors of Van and Bitlis to arrest Armenians who might be rebel leaders or might attack Muslims, and ordering them “to be deported to Bitlis immediately in order that they be exterminated”. No euphemisms here – like the Nazis’ infamous “final solution”. The Ottoman officials use the Turkish word for extermination: imha.

In some villages near the town of Baskale, the entire male population above the age of 10 was killed. Two months later, in February 1915, an Armenian deputy in the Ottoman parliament sent a report from Van to Talaat Pasha, the Ottoman interior minister in Istanbul, who would be held responsible for the entire genocide of a million and a half Armenians, telling him that “massacres are being carried out in some villages and townships in the environs of Baskale and Saray”. Clearly, local Ottoman officials were instigating the genocide – and then asking their masters in Istanbul to approve their decisions.

Akcam has unearthed evidence that local governors would sometimes travel to Erzurum – almost 800 miles from the Ottoman capital – to hold joint meetings on the killings and then communicate their decisions to Talaat Pasha. One of them – only days before the date on which Armenians today recognise the start of their genocide – records an instruction from Erzurum to the governor of Bitlis to send Kurdish militias after the Armenians. On some occasions, it is apparent that regional governors would gather around a single telegraph machine in Erzurum and conspire together with Istanbul in an early 20th-century version of a social media conference call: meetings by telegram.

That the governors fully understood the wicked nature of their acts – and clear evidence that Talaat was well aware of their criminal nature – is reflected in the constant instruction that their telegrams were “top secret” and “to be decoded by the recipient only”. One telegram stated that “the copy of the cable was burned here on the spot. Please ensure that Istanbul burns their copy”.

On 17 November 1914 – scarcely two weeks after Turkey had joined its German and Austro-Hungarian allies in their war against Britain and France, and long before the previously regarded date of the genocide’s commencement – Erzurum governor Tahsin wrote to Talaat that the time had come “to take permanent decisions and orders in regard to the Armenians”. Talaat archly replied that Tahsin should “carry out what the situation demands … until definitive orders are given in regard to the Armenians”.

As historian Akcam writes in his essay in this month’s issue of the Journal of Genocide Research, Istanbul was essentially “giving the green light to Erzurum for the violent actions that it would subsequently carry out”. At the end of November 1914, we find Talaat slyly instructing Governor Cevdet of Van that “until decisive orders are given, it is necessary to carry out the measures demanded by the situation, but judiciously [sic] implemented”.

Cevdet, under whose authority 55,000 Armenians would be killed, had warned Istanbul that gangs of Armenians were fighting on the side of the Russians in Iran and the Caucasus and that this had been viewed as a “general uprising by the Armenians”. Armenians did indeed ally themselves with Russian troops – for the Tsar was an ally of the Anglo-French entente against the Ottomans – advancing into eastern Turkey. Armenian historians acknowledge this historical fact but point out, correctly, that when Armenians usually took up arms, it was to defend themselves against the Turkish genociders. Around Van, however, there was also evidence, later in the war, that Armenians had revenged their own persecution by massacring the inhabitants of local Turkish Muslim villages.

Hitherto, Turkish historians – other than Akcam and a few brave colleagues – have refused to recognise the Armenian genocide as a genocide.

They have suggested that the deportation of the Armenians may have been prompted by the Allied landings at Gallipoli in the fourth week of April 1915, a few hours before the first Armenian leaders were arrested in Istanbul, or by the Turkish defeat at the battle of Sarikamish in January 1915. But to suggest that the mass killings of a million and a half people could have been devised in so short a time is ridiculous. For example, Governor Resit of Diyarbakir told Istanbul of his plans weeks before Gallipoli, expressing the view that “it would be profitable … to implement practices as harsh and effective as necessary against the Armenians”.

Still apparently concerned that the killings in his own district of Sivas had not been given an official imprimatur, Governor Muammer wrote to Istanbul in a telegram on 29 March 1915 that “if a decision has been taken by the central [government]…that would ensure the orderly mass removal and elimination [sic], I ask that you permit its communication without delay”. Other governors referred to the Armenians’ “annihilation” and the “implementation of exterminatory measures”.

The start of the Armenian genocide in December 1914 could have been no surprise to the authorities in Istanbul, certainly not to Talaat. The Erzurum decision was originally taken by Bahaettin Shakir, the head of the “Special Organisation” and the man largely regarded as the architect of the Armenian genocide. But he was himself a central committee member of the governing Union and Progress Party and had arrived in Erzurum from Istanbul. Perhaps Talaat found it expedient to begin the genocide – or to give the project a trial run – far from the capital and its foreign ambassadors, especially the Americans who would publicly reveal the later massacres to the world.

Akcam himself is still bemused as to why Ottoman archive personnel produced the incriminating papers for him. “The decision and following exterminations resemble … the first killings of Einsatzgruppen in Poland,” he told me. “I discovered other telegrams from local governors again in the Ottoman archive where the term ‘extermination’ of Armenians is openly used. These are amazing discoveries. I don’t know why they made these documents available for researchers.”

They certainly disprove the idea – widely disseminated by Turkish genocide deniers – that the Armenian deportations and killings occurred when Turkey was experiencing serious military difficulties and the prospect of losing the war. Not only were the Erzurum decisions taken five months before Gallipoli and a month before the Russians destroyed Turkish forces in the forests of Sarikamish; the killing of Armenians was underway well before the Ottoman state was endangered.

The early massacres of Armenians in the far east of Turkey – long before the Armenian community in Istanbul felt threatened – oddly parallels the experience of Jews in Vienna after Hitler’s 1938 Anschluss, when the Nazis incorporated Austria into the Third Reich.

Jews who fled the mass killing and anti-semitism of the Austrian capital for Germany found that Jews suffered less discrimination in Berlin. This, of course, was not to last. The Germans preferred to commit their grossest crimes of humanity against the Jews outside the Reich: in the ghettos of Poland and the Ukraine – in Babi Yar – in the killing fields of Belarus and Russia and then, after Wannsee, in the extermination camps and gas chambers set up in Poland.

Hitler followed the history of the Armenian massacres closely and often referred to them in the years before the Second World War. Nazi Germany envied the Turks for having “purified” the Turkic race and German diplomats in Turkey during the First World War witnessed the Armenian deportations in cities far from Istanbul. Rural Muslim Turkish and Kurdish communities far from the sophistication of Istanbul or Smyrna might have more easily accepted the first brutalities; they were certainly to participate in them.

In other words, local towns provided the impetus for killing the Ottoman empires’ minorities, just as Baltic and Ukrainian militias allied to the Nazis did not need to be instructed to murder their Jewish neighbours. Nor were the Croatians ordered by Berlin to slaughter their Serbian neighbours after Germany occupied Yugoslavia in 1941; they did so without orders from Berlin. The roots of their genocidal racism already existed.

Does this apply to Rwanda, where up to a million Tutsi and moderate Hutus – including 70 per cent of the Tutsi population – were massacred in the 1994 genocide? This was centrally organised and planned, but the execution of these crimes against humanity was in the hands of Hutus across the entire country, where neighbours killed neighbours. And in their persecution and murder of Christians and Yazidis in Iraq and Syria, Isis – which included Muslims from around the world – may not have been specifically aided by the local population; but while Arabs tried to protect their neighbours, others systematically looted their homes and property after Isis had slaughtered or deported the owners.

Hebrew University of Jerusalem lecturer Umit Kurt studied the 1915 dispossession and killing of Armenians in the southern city of Aintab and found that local Turkish Muslims freely and willingly participated in the crimes. What he discovered was that a genocidal government must have the local support of every branch of respectable society: tax officials, judges, magistrates, junior police officers, clergymen, lawyers, bankers and, most painfully, the neighbours of the victims. Not to mention the governors.

In other words, leaders do not commit genocide, not on their own. Ordinary people do. And holocausts can start far from home, in the frozen east, and long before the date we all believed the bloodbaths began.