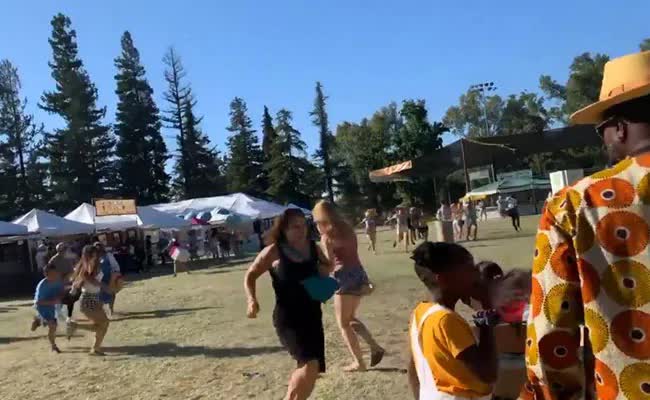 A witness named Julissa Contreras told NBC a white man in his 30s armed with a rifle opened fire indiscriminately.

A shooter opened fire at a major food festival in the US state of California on Sunday, police said, with US media reporting at least three people have been killed and multiple others wounded.

Footage on NBC showed people running as shots rang out at the Gilroy Garlic Festival, 30 miles (48 kilometers) southeast of San Jose, one of the largest food festivals in the country.

A witness named Julissa Contreras told NBC a white man in his 30s armed with a rifle opened fire indiscriminately.

“I could see him shooting in just every direction. He wasn’t aiming at anyone specifically. It was just left to right, right to left,” Contreras said, according to NBC.

“He definitely was prepared for what he was doing,” she said.

The shooting left one person dead and several others wounded, according to the San Francisco Chronicle.

“Law Enforcement is at the scene of shootings in Gilroy, California. Reports are that shooter has not yet been apprehended,” US President Donald Trump tweeted.

The San Francisco division of the Bureau of Alcohol, Tobacco, Firearms and Explosives said on Twitter that it was “responding to the scene of a reported shooting at the Gilroy Garlic Festival in Gilroy, California.”

The Mercury News reported that the shooting took place as the festival was winding down.

“I called out, ‘It’s a real gun, let’s get out of here,’ and we hid under the stage,” Viaggi said, according to the newspaper.

Thirteen-year-old Evenny Reyes told the paper that “we were just leaving and we saw a guy with a bandana wrapped around his leg because he got shot. And there were people on the ground, crying.”

“There was a little kid hurt on the ground. People were throwing tables and cutting fences to get out,” said Reyes.

“The hearts of Gilroy PD and entire community go out to the victims of today’s shooting at the Garlic Festival,” the local police department tweeted.

“Grateful to first responders who are on the scene in Gilroy and keeping those injured by such senseless violence in my thoughts,” Senator Kamala Harris, who is running for the 2020 Democratic presidential nomination, wrote on Twitter.

Shootings are a frequent occurrence in the United States, but despite the scale of the gun violence problem in the country, efforts to address it legislatively have long been largely deadlocked at the federal level.