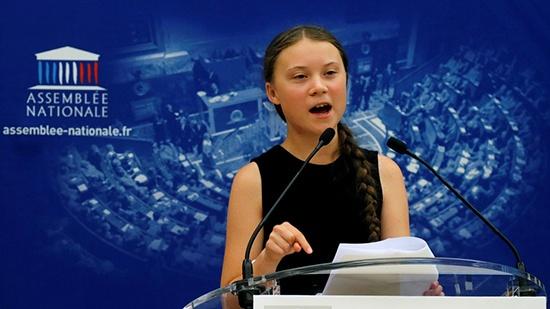 After nearly a year of her endless tour through parliaments and conferences, the climate activist must by now realize that she is little more than a feelgood photo op and an advert for train travel. Is Greta Thunberg OK with this?
In France on Tuesday, the 16-year-old delivered her stenciled masterclass of rhetoric presented as stark plain-spokenness.
“You say that nothing in life is black or white. But that is a lie. A very dangerous lie,” she told the packed hall of deputies from a lectern adorned with the tricolor and parliamentary insignia. “Either we choose to go on as a civilization or we don’t. That is as black or white as it gets.”
“It’s almost like you don’t even know these numbers exist. As if you haven’t even read the latest IPCC report, on which much of the future of our civilisation is depending.”

A part from my speech yesterday at the French Parliament. pic.twitter.com/Kg9a5mjNyg
— Greta Thunberg (@GretaThunberg) July 24, 2019
As always, she grabbed the newspaper headlines and 75,000 likes on the video she posted of her speech to her 800,000 Twitter followers, and later sat in the senate hall as it voted to ratify the EU-Canada Comprehensive Economic and Trade Agreement (CETA) despite objections from the Green Party that it will increase emissions and undermine existing environmental regulations.
One MP called the vote “Greta or CETA?” to draw attention to the poignancy of the contrast between her speech and the actions that followed, but the treaty was passed with overwhelming support from Emmanuel Macron’s En Marche, and his personal endorsement.
The same Macron who happily received Thunberg at the Elysee Palace back in February, and yes, posed for a photo with her, his hand laid paternally on her shoulder as he stood surrounded by school-age activists.

Greta Thunberg poses with Emmanuel Macron in February. © Facebook/Youth for Climate
This is the same Macron who has a gap between his environmental promises and actions that has long alienated members of his own cabinet, as he has failed to act on issues as wide-ranging as emissions, nuclear power, or glyphosates. His main tangible attempt to help realize the Paris climate agreement he so ardently endorses has been the fuel tax, and we know what happened there.
So, it is clear what he and his party, which invited her to parliament, get out of the association, but it is less clear why Greta is so keen. If the world is on the verge of, in her own words this week, “the greatest and most complex challenge that homo sapiens have ever faced,” should she be posing with professional greenwashers like Macron, who pay lip service and salve liberal consciences but are arch-capitalists who let the system continue as before? Aren’t they the real enemies?
Now, I am not masquerading as an ally to her cause, or a fan of her moralistic bludgeoning method of winning complex debates, as is amply evident from my previous writing on the subject, but surely even her supporters are beginning to experience some level of cognitive dissonance.
Maybe Thunberg is in on the whole con. But more likely she is fanatically sincere to the point of being easy to manipulate. Her true sympathies may lie with the street protests of Extinction Rebellion but tactically the teenager evidently believes that no red carpet is too dirty to walk on, no pulpit too greasy to hold on to while making a speech.
The net result has been a traveling bourgeois dog-and-pony show of baseless self-congratulation. Daily features in the Guardian, Thunberg becoming the face of railway travel used for publicity by a Swedish train operator, releasing a single with the band 1975, who presumably plan to fulfill their tour dates before the end of 2019 in Ukraine, Dubai, Hong Kong, Australia, and the US exclusively through ground and water transport. The exalted Greta may not be comfortable with this, but she hasn’t shied away from it either, though her current public profile would allow her to criticize any powerful figure or corporation in the world, and still have her views front-paged.
Amid the backlash that has been brewing against the sanctimony and the hypocrisy, a French politician called her “the Justin Bieber of ecology.” But in my view, she is more like the Sex Pistols, bright-burning naïfs erupting in inchoate rebellion, exploited by cunning management for maximum publicity, then used to sell Chinese-made safety pins and Anarchy sweatshirts for the next 40 years. Though, as capitalism has got more efficient at co-opting popular movements, within a year she’s already moved from the radio ban stage, to John Lydon hawking butter on TV.
The next leg of Thunberg’s tour takes her to the United States, the land of the West’s biggest per capita CO2 emitters, and the greatest and most ineffectual virtue signalers. Al Gore and Nancy Pelosi are licking their lips.
By Igor Ogorodnev
Igor Ogorodnev is a Russian-British journalist, who has worked at RT since 2007 as a correspondent, editor and writer.
RT