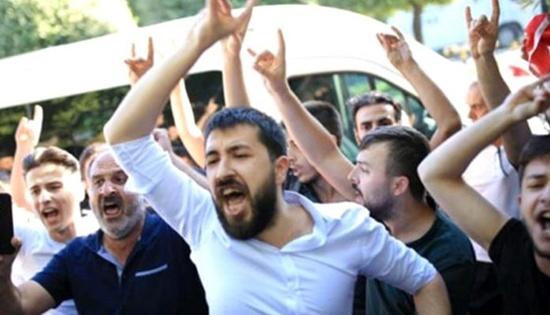 Nationalist groups attacked a demonstration held on Saturday by Syrian immigrants living in İstanbul who were protesting an order issued by the governor’s office, Turkish media reported.

In a statement on Monday the governor’s office said there are 1,069,860 foreigners registered in İstanbul, 547,479 of whom are Syrians who have temporary protection status, adding that those who do not leave İstanbul by Aug. 20, will be sent back to the cities where they are registered in line with an order from the Interior Ministry.

After a group of angry nationalists shouted and attacked the protestors, the police dispersed the crowd with pepper spray, detaining two people.

Among the protestors were Turkish human rights activists and advocacy groups who read out a statement saying that deportations would not serve peace in society.

“Using police force against immigration problems will not solve them but will make them worse,” the Lawyers Association statement said.

Turkey hosts nearly 3.6 million Syrians who emigrated after a civil war began in Syria in 2011.