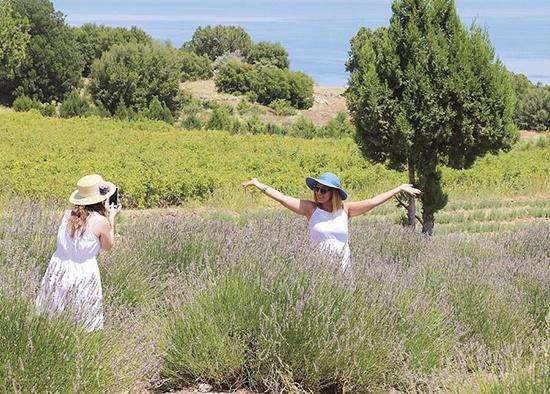 Turkey’s southern province of Burdur – home to the 5,000-year-old ancient city of Sagalassos, Salda Lake, known as Turkey’s Maldives, and a 375-decare Akçaköy lavenderfield, has become a recent favorite spot for tourists.

Visitors from cities such as Istanbul, Ankara, İzmir, Antalya, Bursa and Denizli, especially on weekends, enjoy taking photos in the endless-like lavender field, cooling in the lake with white sand and turquoise water and enjoying the journey to the ancient city at an altitude of 750 meters.

The region is expected to draw a total of 1.5 million tourists by the end of the year.

Speaking to the state-run Anadolu Agency, Emre Eker, a tour guide in the Cappadocia region, said tours to these three spots in Burdur are available daily.

Stressing that the region attracted attention in recent years due to the visual feast of lavender gardens, Eker said that people from Antalya, Cappadocia, Marmara and various parts of the country flocked to the region in June and July.

He said that especially in recent years, Russian tourists visiting Antalya showed interest in the lavender field and the lake, and they wanted to take pictures in the region by joining daily tours.

Eker stated that the ancient city of Sagalassos is close to the lavender field and the lake, and added, “Sagalassos, the city of lovers and emperors, Salda Lake, roses and lavender gardens make this area attractive for day visitors … We, as tour companies, are trying to meet the demand.”

Professional guide Ali Kütük said that in recent years, visitors showed great interest in the lavender gardens. Stating that people had interest in ecotourism instead of coastal tourism over the last three years, Kütük said the following:

“Domestic and foreign tourists flock to the region. Based on the demands we received, we expect that around 400,000 tourists will visit the lavender fields in Isparta and Burdur this year. This demand makes a great economic contribution to the region of lakes. Daily tours are organized to the lavender field in Burdur and Kuyucak village of Isparta. Of course, these tours are combined with Salda, one of the most beautiful lakes of our country, and Sagalassos. In the region, especially on weekends, many visitors come to the region. We anticipate that this interest will increase in the coming years. People come from almost every corner of our country. In recent years, Russian and Far Eastern tourists started to visit the region. In addition, our guests from the Netherlands, Italy and Poland also join these tours.

Öztürk Sarıca, who helped create the Akçaköy lavender field project, said that the region started to host serious number of tourists.
Stating that the ecotourism-themed Lisinia Nature Project Field was among the tour routes, Sarıca said the following:

“Akçaköy lavender field, which is located near the project area, has started to attract visitors as a result of our investments. This is among the largest lavender gardens in Turkey and even Europe. Photos can be taken from 12 different angles. It is very popular among photographers. We have doubled the number of visitors compared with the same period last year. Last year, we reached 150,000 at this time of the year; now, we have exceeded 300,000 visitors in the lavender field.”