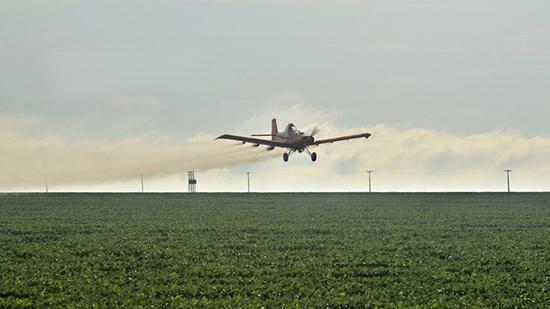 Brazil’s embrace of highly toxic pesticides – the government has approved 262 so far this year and loosened regulations on what is considered “extremely toxic” – is affecting people far outside its borders, an expert tells RT.

“EU-banned pesticide[s are] being manufactured in the EU, and then coming back to citizens in the EU, in the food we eat,” environmental journalist and founding member of the Green Economic Institute think tank Oliver Tickell told RT, explaining that as one of the largest soy exporters in the world, Brazil supplies a significant quantity of the feed that cattle and other livestock worldwide consume. European consumers tucking into a juicy steak have no idea that the creature they’re eating might have been nourished on soy sprayed with highly toxic pesticides.

“This is not just a problem for Brazil and Brazilian people and people exposed in the countryside to these pesticides and consumers and farmers,” Tickell warned. “It is actually affecting people all over the world through Brazil’s agricultural exports.”

ANVISA, the Brazilian public health regulatory agency, relaxed pesticide regulations last week so that only those chemicals with lethal potential can be classified as “extremely toxic,” triggering a massive backlash from environmental groups, human rights organizations, and food safety advocates. The fervently pro-business government of President Jair Bolsonaro has already approved 262 pesticides this year, 82 of which are classed as “extremely toxic,” as he follows through on campaign promises to demolish environmental regulations and open up protected rainforest lands to mining and agriculture.

Dozens of pesticides banned or strictly regulated in the EU, including paraquat and chlorpyrifos, were already permitted for use in Brazil before Bolsonaro took power, and the country uses approximately 400,000 tons of pesticides per year, according to Human Rights Watch. While Agriculture Minister Tereza Cristina has flatly denied Brazil uses any more pesticides than any other country, attributing such allegations to “data manipulation” and accusing critics of “terrorism,” EcoWatch claims the country consumes more pesticides per capita than any other nation.