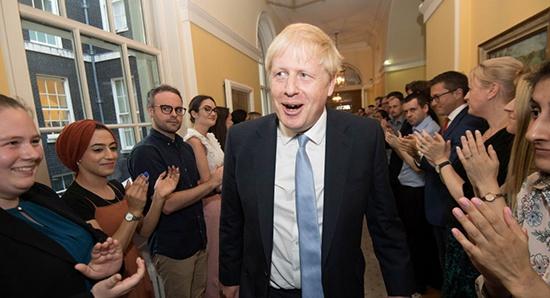 Boris Johnson wants to change the exit terms struck by Theresa May but insists Britain must leave the European Union on the October 31 deadline.

British Prime Minister Boris Johnson on Monday urged EU leaders to drop their opposition to renegotiating Brexit, as the pound slumped on growing concerns about a no-deal departure.

Johnson, who took office last week, wants to change the exit terms struck by his predecessor Theresa May but insists Britain must leave the European Union on the October 31 deadline — with or without a divorce deal.

Brussels has said it will not reopen the text.

“The withdrawal agreement is dead,” Johnson told reporters during his first visit to Scotland as premier.

“I am confident we will get a deal but it is also right we prepare for no deal,” the Conservative leader said.

Johnson met Scottish First Minister Nicola Sturgeon, the leader of the separatist and pro-EU Scottish National Party, who accused him of secretly pursuing a no-deal Brexit that she said would be “catastrophic”.

“Behind all of the bluff and bluster, this is a government that is dangerous,” Sturgeon said afterwards.

“This is a government that is pursuing a no-deal strategy, however much they may deny that.”

She said believing that Brussels would change its offer was “a strategy doomed to failure”.

The government has not yet announced plans for Johnson to visit EU capitals, and a spokeswoman indicated he would not go until Brussels changes its stance.

“He obviously wants to meet EU leaders and negotiate but not to be sat down and told that the EU cannot possibly reopen the withdrawal agreement,” the spokeswoman said.

Britain’s pound lost more than one percent of its value against the dollar on Monday, hitting its lowest level since March 2017.

The Confederation for British Industry, the country’s top business lobby group, said companies now needed to be on an “emergency footing” because of the growing likelihood of no deal.

In a report, the CBI warned that both Britain and the EU were not prepared for a no-deal Brexit and urged businesses to step up contingency plans.

“Negotiating and signing exciting new free trade agreements is my top priority — and none are more important than with the United States,” she said, talking up the “golden opportunities ahead”.

The Institute for Government warned that a no-deal Brexit would “dominate government for years”, allowing little room for other domestic priorities outlined by Johnson such as health, education and transport.

The think-tank said such an outcome would also place the United Kingdom, which brings together England, Scotland, Wales and Northern Ireland, “under unprecedented pressure”.

In the 2016 referendum, 62 percent in Scotland voted in favour of the UK remaining in the EU, as did 56 percent of voters in Northern Ireland.

Irish Prime Minister Leo Varadkar has also said that a no-deal Brexit would make more people in Northern Ireland “come to question the union” with Britain.

Johnson, who will take the symbolic title of minister for the union alongside that of prime minister, announced £300 million ($370 million, 332 million euros) of new investment for Scotland, Wales and Northern Ireland ahead of Monday’s visit.

Sturgeon told Johnson that the devolved Scottish Parliament would consider legislation in the coming months for another vote on leaving the UK.

Johnson also visited a military base in Scotland before meeting Scottish Conservative leader Ruth Davidson, who has been opposed to a no-deal Brexit.

Johnson plans to visit local farmers in Wales and in Northern Ireland to discuss the ongoing talks to restore the devolved government.

The investment boost comes after the prime minister announced a £3.6 billion fund supporting 100 towns in England, raising suggestions that he is already in campaign mode for an election.

Many MPs are opposed to leaving the EU without a deal, and could try to topple the government in an attempt to prevent that happening — potentially triggering a general election.