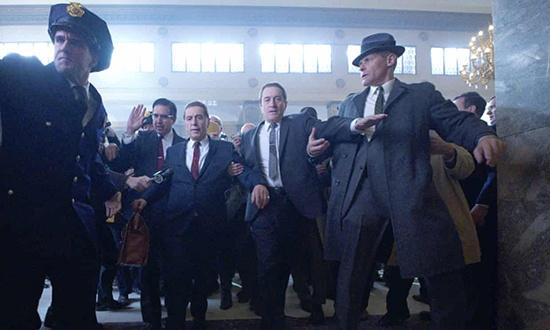 Martin Scorsese’s long anticipated gangster film The Irishman is to receive its world premiere as the opening film at the New York film festival.

Described by the festival as “a richly textured epic of American crime, a dense, complex story told with astonishing fluidity”, The Irishman pairs Robert De Niro, as Irish-American hitman Frank Sheeran, with Al Pacino, who plays union boss Jimmy Hoffa. It is based on I Heard You Paint Houses, Charles Brandt’s book about Sheeran which claims he was responsible for Hoffa’s murder in 1975. Joe Pesci plays mafia boss Russell Bufalino.

Festival director Kent Jones said The Irishman is “funny, troubling, entertaining and, like all great movies, absolutely singular”. He added: “It’s the work of masters, made with a command of the art of cinema that I’ve seen very rarely in my lifetime, and it plays out at a level of subtlety and human intimacy that truly stunned me.”

The Irishman is Scorsese’s ninth collaboration with De Niro, and his fourth with Pesci, but is the first time that he has directed Pacino. De Niro and Pacino last acted together in 2008 crime thriller Righteous Kill.

The project attracted some controversy after it was purchased by streaming giant Netflix in 2017 in the wake of the poor commercial performance of Scorsese’s previous film, the clerical drama Silence. However, Scorsese avoided a clash with the Cannes film festival earlier this year after it was reported the film was not finished in time. The French festival refuses to screen Netflix films due to regulations designed to ensure it champions cinema releases.

The Irishman will be screened on 27 September at the New York film festival, and will be released in cinemas and on Netflix later in the year.