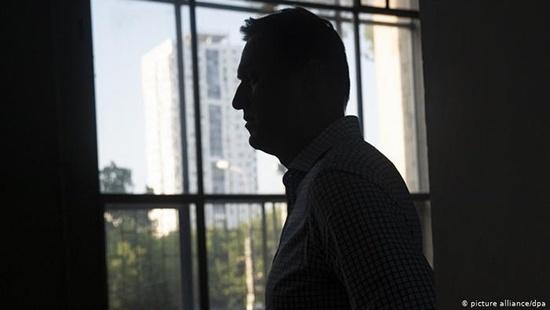 Russian activist Alexei Navalny said his eyebrows had swollen to the size of “Ping-Pong balls” before he was hospitalized for an alleged allergic reaction. Writing from jail, he also commented on possible poisoning.

Kremlin critic Alexei Navalny published a new blog, apparently from his jail cell, on Monday, after he underwent emergency treatment for what authorities said was a severe allergic reaction. Many of his allies suspect he had been poisoned.

“I’ve never had allergies — not to food, not to pollen or anything else,” Navalny wrote. “I can lie down on a haystack in the month of May and eat lemons seasoned with all kinds of nuts.”

The opposition leader was arrested last week and spent several days in jail when his symptoms started to appear. He was then rushed to a Moscow hospital with severe swelling. Authorities transported him back to the same jail cell on the following day, despite opposition from his long-time doctors.

In his Monday blog post, Navalny refers to being back in his cell. It was not immediately clear how the blogger managed to get the article online.

Navalny said he was locked up with five different people in the same cell like during his previous jail stint, two weeks before. He also claimed to be sleeping on the same bunk and on bed sheets he had brought from home.

According to the 43-year-old opposition leader, he first noticed light irritation and discomfort on Saturday evening, which was his fourth day in detention. He then described waking up that night with a sensation of burning on his face, ears and neck.

“I felt like someone rubbed glass wool all over my head,” he wrote. By the morning, his eyebrows have swollen to the size of Ping-Pong balls, he added.

The swelling went down once he was transported to the hospital and treated with massive doses of steroid-based prednisolone and anti-allergic drug suprastin.

He wrote that “by lunch time, I simply looked like a man who went on a two-month drinking binge.”

“Right now, I look like man who has been drinking for a week.”

Navalny was diagnosed with “contact dermatitis.” In his article, he claims “weird stuff” was happening while he was in the hospital.

“Police at the door of my room. They are not letting my doctors get in, my lawyer is not allowed in,” he wrote. “In other words, they are acting like they have to hide something just in case.”

Navalny’s long time doctor, ophthalmologist Anastasiya Vasilyeva, separately said he had been poisoned by “some sort of unknown chemical substance.”

In his blog post, Navalny also considers the possibility of poisoning and refers to previous such cases, including Pussy Riot activist Pyotr Verzilov, Kremlin critic Vladimir Kara-Murza, and Sergey Skripal.

“I am rejecting the possibility that I was poisoned by local cops — they were more shocked than me by how I looked and what had happened,” Navalny wrote.

“I think there is a simple distinction: has anyone else been here except for the [prison] staff?”

“There are cameras everywhere, we have officially asked for [the videos],” he says in the blog post.

“We need those moments when everyone was taken out for walks or phone calls. If, during that time, some people entered the cell, that the poisoning version is becoming very substantial.”

“However, there is still an obvious question. Are they such complete idiots, to poison you there where only they can be suspected?” he wrote.

“Right now, I can confidently claim that there enough dumb and stupid guys in Russia’s government. You just think you need to find secret meaning and a quantum of reason in what they do. And they are actually just stupid, mean, and obsessed with money.”