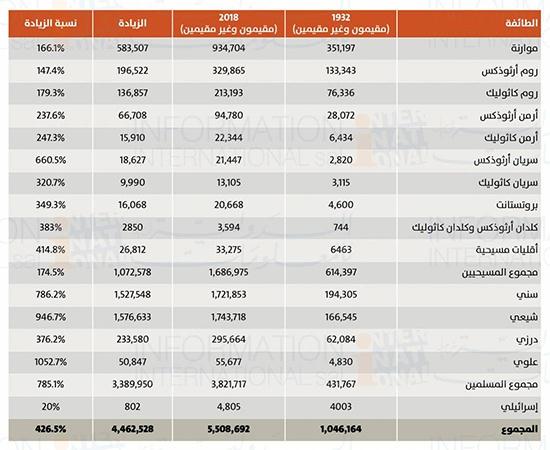 The data was gathered and provided by “Information International,” an independent regional research and consultancy firm based in Beirut and founded in 1995.

BEIRUT: The number of Lebanese nationals has increased by 426%, with nearly 4.4 million new people born since 1932, bringing the current total to around 5.5 million, according to a recent report. The increase is around 174.5% for Christians and 785.1% for Muslims.

Lebanon’s last demographic study was 87 years ago, while other countries have periodic population statistics every three to five years. Lebanon is an exception to this particular and essential rule as demography tends to be a sensitive issue considering how the governmental structure is based on it. Some fear that the results could trigger a renewed bout of inter-communal fighting.

The data was gathered and provided by “Information International,” an independent regional research and consultancy firm based in Beirut and founded in 1995. The firm published a table that shows the increase in the population between 1932 and 2018, and thoroughly explains the distribution of the population according to sects.

The Shiite community-ranked first in terms of the biggest communities, representing 31.6% of the population, followed closely by Sunnites at 31.3%, and Christians at 30.6%.

Given Lebanon’s divisive politics, some feared that this report was published in order to elicit sectarian tension, while others considered the demographical change as nothing but a natural process in the country’s lifespan.

This table shows the distribution of the population according to sects. (Source: International Information)