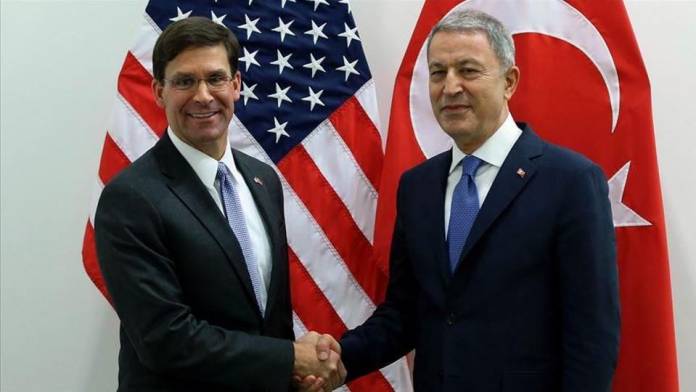 Turkish Defence Minister Hulusi Akar said Turkey would be obliged to create a safe zone on its own in case the two countries failed to find common ground, according to a statement released by the National Defence Ministry on Monday.

The Turkish defence minister has told his US counterpart over a phone call that Turkey expects the US to completely end its support to the PKK/YPG terrorist group.

The ministry said Akar congratulated Mark Esper for his new post as the US defence secretary and they discussed the plan on a safe zone in northern Syria.

Akar emphasised that they would not allow a terror corridor in the south of Turkey and that Ankara wants to assure safety and security of not only its country and people but also other religious and ethnic groups like the Kurds, Arabs, Assyrians, Christians and Ezidis living in the region.

Akar also stressed that Turkey is the only competent, efficient and pertinent power to provide control over a safe zone in northern Syria.

He said that the safe zone should be created under the criteria that include retrieval of all weapons from the PKK/YPG situated in the safe zone, wiping off the terrorist organisation from the safe zone which should be 30 to 40 kilometers in width, destruction of PKK/YPG’s all tunnels, shelters, equipment and ammunition in the area which will be controlled by Turkey and the US in coordination.

Regarding the F-35 fighter jet program, Akar noted that Turkey was not just the customer of the project but also the investor and production partner and that the program should continue as planned.

In its more than 30-year terror campaign against Turkey, the PKK — listed as a terrorist organisation by Turkey, the US and the EU — has been responsible for the deaths of 40,000 people, including women, children and infants.