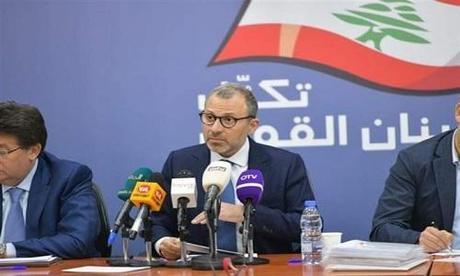 Free Patriotic Movement chief Jebran Bassil on Tuesday slammed what he called “threats” to resort to the rule of sectarian majority, in connection with the sectarian controversy over Article 80 of the 2019 state budget.

“We have heard threats on the resumption of (the sectarian) counting (of the population) and we had thought that the issue is not something that changes according to political circumstances,” Bassil said after a meeting for the Strong Lebanon bloc.

“We will die for each other and for preserving national unity, but when we hear anew remarks about the numbers formula, this means that the formula (of Lebanon) and the National Pact are being questioned,” the FPM chief added.

“The result of counting is known and we know where we’ll get, but would this be the Lebanon we know?” he went on to say.

He added: “Let no one threaten us with counting, because this threat will turn against those who voice it, seeing as we also have our choices and they’re all patriotic choices that preserve this country.”

“We know how to preserve it (the country) and we will not abandon it. Those who talk about numbers and question these principles are the ones seeking to get rid of Lebanon and its formula,” Bassil warned.

The budget article in question “preserves the employment right” of those who succeeded in Civil Service Council exams for a period of six years. The FPM says an agreement had been reached on dropping the article seeing as there would be no “sectarian balance” should those who passed the exams be appointed as civil servants.

There are conflicting reports on whether or not the article was officially dropped during parliament’s sessions on the state budget but it was included in the text that was sent to President Michel Aoun for approval.