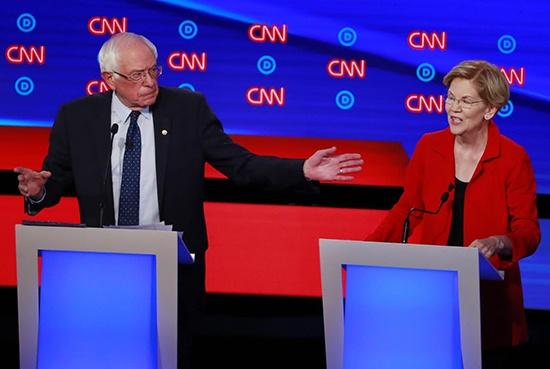 This story will be updated as the debate continues.

The great irony of Donald Trump’s presidency is the dizzying contradiction between his personal conduct and his policies, and his claim to be the defender of American values. Onstage at the first part of the second Democratic presidential primary debates tonight, Trump’s potential 2020 opponents moved aggressively to take morality back for their team.

Senator Elizabeth Warren of Massachusetts led the way, speaking about everything from immigration to health insurance in the language of “values.” “We need to continue to have border security and we can do that, but what we can’t do is not live our values,” she said.

In recent weeks, vivid imagery of crowded conditions in border detention facilities has taken over the news, and Warren put the blame on Trump’s policies. “I’ve been down to the border,” she said. “I have seen the mothers. I have seen the cages of babies. We must be a country that every day lives our values.”

Warren also criticized the assumptions that sneak into debates about the American health-care system, among others: that profit-seeking is definitively moral and good, and that the country’s economic system should be structured to benefit companies above everyone else. “These insurance companies do not have a God-given right to make $23 billion in profits and suck it out of our health-care system,” she said.

Marianne Williamson, the author and spiritual-self-help guru, also hit this theme hard during tonight’s debate. “An amoral economic system has turned short-term profits for huge multinational corporations into a false god,” she said. “This new false god takes precedence over the safety and the health and the well-being of we, the American people, and the people of the world and the planet on which we live.” Throughout her campaign, Williamson has pushed this kind of language, arguing that wonky policy proposals are not enough for Democrats to win back America.

The other candidates seem to have taken note—or at least realized that many Americans are looking for more than just a plan-maker in chief in their next president.

Senator Bernie Sanders of Vermont called for a “humane border policy.” In response to a question about racism, former Colorado Governor John Hickenlooper argued that “the core value behind this entire country’s history is working towards a more perfect union, that all people are created equal, and we have fallen far away from that.” And a clip at the beginning of the debate showed Mayor Pete Buttigieg of South Bend, Indiana, saying, “Don’t let anybody tell you that freedom is a conservative value. It is an American value.” Later, during the debate, he derided Republicans for their opposition to raising worker wages. “So-called conservative Christian senators right now in the Senate are blocking a bill to raise the minimum wage, when scripture says whoever oppresses the poor taunts their maker.”

The Democratic candidates have not necessarily resolved, among themselves, what it means for a president to stand for American values. Several of the less well-known candidates, including Hickenlooper and Montana Governor Steve Bullock, argued that they stand for progressive values and American values, but they don’t agree with the grand proposals being advanced by some of the leading candidates. And Senator Amy Klobuchar of Minnesota pushed back on Sanders’s rhetoric about the moral imperative of creating a government-funded health-care system; other solutions may be just as moral, and much more practical, she said.

The fact that Democrats are having this debate at all, however, shows that they recognize the deeper stakes of the 2020 election. Presidential elections are about policy and partisanship and ideology, certainly, but they’re also a test of where America stands. In a time of intense anxiety and fracture, when many Americans in both parties fear that the country is veering away from its fundamental values, Democratic presidential candidates have to offer a vision for how to remedy the country’s broken soul. Otherwise, they may find themselves sitting alone in a hotel room on November 4, surrounded by their stacks of plans with nowhere to go.