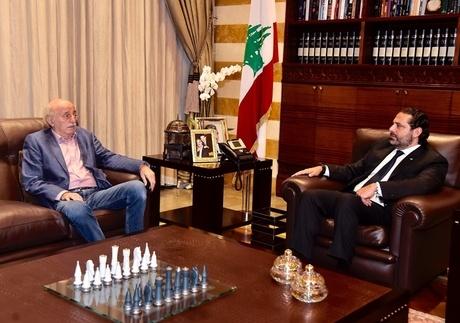 A statement issued by Hariri’s office said talks tackled “the general situations and the latest political developments in the country” and that discussions were continued over a dinner banquet.

According to al-Jadeed TV, Arslan categorically rejected a Hariri initiative carried by Ibrahim.

“Hariri proposed voting in Cabinet on the (issue of referring the) Qabrshmoun case (to the Judicial Council), a demand that will definitely be defeated in Cabinet, after which a vote would be held on the possibility of referring the Choueifat and Qabrshmoun cases adjoined to the Judicial Council, and such a proposal will also fail to pass,” al-Jadeed said.

“Accordingly, the Cabinet will resume its work without giving the impression that a camp has defeated another,” the TV network added.