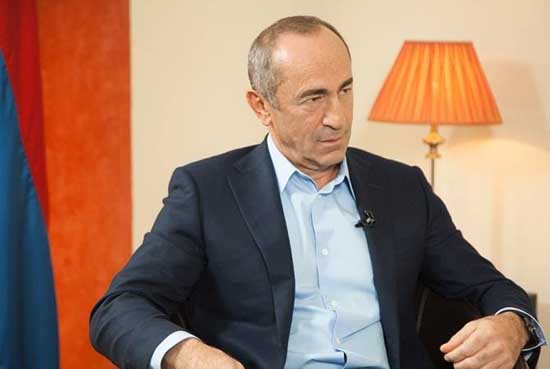 Baku/31.07.19/Turan: Ex-President of Armenia Robert Kocharian under arrest declared that the Pashinyan government would fall soon. He confirmed his participation in the process of consolidation of the opposition in order to eliminate Pashinyan from power.

In an interview from the prison of the Voice of Armenia, Kocharyan said that the current state apparatus serves the instincts and whims of one person. Power itself is primitive and demonstrates functional impotence, Kocharyan said.

By the autumn there will be several opposition centers that will be able to consolidate and oppose the Armenian authorities, “In these processes I will be an important link … In the fall, the process of consolidation and formation of partnerships in the opposition field will be completed and the political struggle will take on a systemic and large-scale character,” he noted.

According to him, the issue of power will be decided on the street, in the early parliamentary election. “With such a quality of management, this power will not last long and does not have prospects of re-election,” Kocharyan is sure.

Referring to Yerevan”s foreign policy, he noted that Armenia has a small, aging population with a steadily deteriorating demographic situation. Problem relationship with two of the four neighbors do not allow to become a regional platform for all sorts of projects. “We do not have any significant natural resources that make us attractive to large multinationals. We have a small territory, and It is easy to get around us with new communications. Transport problems affect production costs and severely narrow the possibilities of industrial development “.

The participation of the diaspora in the economic development of Armenia has a clear tendency to reduction. Today there are no signs that the government adequately understands the complexity this situation, Kocharyan believes.

The ex-president considers it wrong to flirt with the West and the Pashinyan government attempts to move away from Russia.

He also accused Pashinyan”s team of exacerbating the situation in Karabakh and called on his countrymen in Karabakh to reject attempts to impose the will of Yerevan on them.