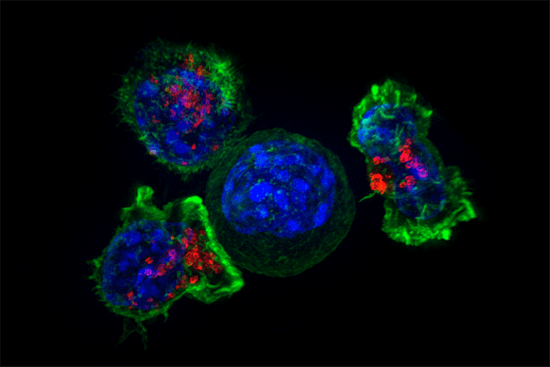 One of the most extensively studied genes in cancer, TP53 is well known for its role as a tumor suppressor. It senses cellular stress or damage, and in response stops cell division or initiates cell death, thereby preventing a damaged cell from reproducing. Mutation of this gene eliminates a key cellular fail-safe mechanism and is a step leading to cancer. Researchers at Baylor College of Medicine have conducted the most comprehensive study of TP53 mutations to better understand the processes leading to the inactivation of this important gene. Their findings, published in the journal Cell Reports, shed light on how the gene becomes mutated and how those mutations can help predict clinical outlook.

The team, led by Dr. Larry Donehower, professor of molecular virology and microbiology at Baylor College of Medicine, studied 10,225 patient samples from 32 different cancers, from The Cancer Genome Atlas, and compared them to another 80,000 mutations in a database collected over three decades by Dr. Thierry Soussi, professor of molecular biology at Sorbonne University. After analyzing this large data sample, they have a more thorough understanding of how the TP53 gene mutation impacts cancer.

“If you have a high expression of those four genes, you have a patient who’s more likely to have a bad prognosis,” Donehower, a member of the Dan L Duncan Cancer Center at Baylor, said. “Conversely, if that patient has a very low expression of those genes, he’s probably going to survive longer and have a good prognosis. It will give you a better picture of how he’ll fare than just knowing whether he’s mutant for TP53 or not.”

At the chromosomal level, the team found a noticeable pattern in TP53 gene loss.

“In some cancer genes, you’ll see one copy of the two genes lost or mutated,” Donehower said. “Over 91 percent of all cancers lose both TP53 genes, not just one.”

This second gene loss occurred due to mutation, chromosomal deletion or gene duplication. According to Donehower, cases of gene duplication occurred at a much higher rate than previously thought.

The research also showed that TP53 mutation correlated strongly with genomic instability, indicative of the role of the normal protein in monitoring chromosome integrity. In most TP53 mutant tumors, other tumor suppressor genes were deleted, while oncogenes that allow cancer to develop were amplified.

While many studies have been conducted on TP53, this is the first to examine such a large number of tumors and cancer types using five different data collection methods. Donehower said the size of this study allowed his team to notice patterns and correlations that might not be evident in a smaller sample.

“Most studies on TP53 focus on one cancer type,” Donehower said. “Looking at 32 different cancer types, you see that certain patterns hold up regardless of cancer type.”

Study author and Director of Cancer Genomics in the Lester and Sue Smith Breast Center at Baylor College of Medicine Dr. David Wheeler said the results of this study may open the door to new approaches in treating cancer affected by loss of this gene.

“Since TP53 is one of the most important gatekeepers in cancer prevention, the better we understand this gene, the better able we will be to understand the basic biology of cancer. That will lead to better therapies,” said Wheeler, a member of the Human Genome Sequencing Center and the Dan L Duncan Comprehensive Cancer Center at Baylor.