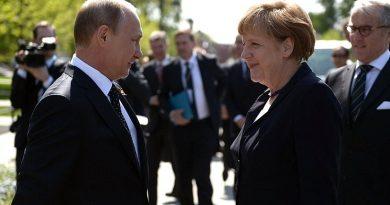 Russia’s Eurocentric foreign policy is focused on Germany, its most significant partner in Europe. The Trump administration’s policies towards Germany, and the rise of anti-EU and anti-NATO populist parties in Europe and Germany itself, could undo the status quo − Germany could seek a closer relationship with Russia.

Germany under Chancellor Angela Merkel has been one of the leading European states that has taken a firm stance against the Russian annexation of the Crimea and perceived support of eastern Ukraine.

Germany has taken an equally tough position on other well-known issues that have divided Russia and the West such as Syria, the Skripal case, and cyber attacks attributed to Russia. Yet Russia has not sought to alienate Germany. Why?

Germany is the world’s fourth largest economy and occupies a strategic location, being geographically situated in the middle of Europe. Russia is all too aware of these hard realities.

Germany is among Russia’s top European economic partners. German businesses invested more than 1.7 billion euros in the Russian economy in the first three months of 2019, exceeding half of last year’s highest-in-the-decade figure of 3.2 billion euros, according to the Russian-German Chamber of Commerce.

The volume of German companies’ investment in Russia increased 33% − or 400 million euros − compared to the same period last year. The Russo-German trade volume totalled 62 billion euros in 2018, an increase of 8.4%.

Some 5,000 of the more than 6,000 companies with German equity participation, remain active in Russia. These figures testify to the keen interest of both countries to ensure that their economic links would not be jeopardised by the strains in political relations.

A common but tortured recent history binds both countries; it remains an important consideration in their bilateral dealings. For Germany, the bloody conflict with the USSR weighs heavily on its conscience. For Russia, Victory Day on 9 May is celebrated annually on a very grand scale.

This is not only to remind its people of the country’s huge sacrifices in blood and treasure but also to ensure that the West in general and Germany in particular, will not forget this brutal era in their common experience. Moreover, cultural, education and social links are strong; the German language occupies second place in foreign language teaching, after English.

Despite massive US pressure, Germany has not weakened its energy relationship with Russia. It continues to support the building of the Nord Stream 2 gas pipeline from Russia to Germany across the Baltic Sea. It is expected to be operational in early 2020.

US pressure has come from President Trump himself. Speaking in July 2018 with NATO Secretary-General Jens Stoltenberg, he argued that Germany was “a captive of Russia – it’s getting so much oil and gas from Russia … It doesn’t seem to make sense that they pay billions of dollars to Russia and now we have to defend them from Russia”.

The US is considering imposing sanctions on the companies involved in the project. President Putin’s press spokesman, Dmitry Peskov, has consistently said that US pressure on Germany is an attempt to push US energy sales to Europe. (US LNG exports to Europe increased 181% during the second half of 2018, according to the US natural gas industry).

Russia might benefit from trade tensions between Germany and the US. American threats to impose tariffs on European car imports would affect adversely Germany since it is one of the EU’s largest car exporters.

Russia is patiently waiting out the end of the Merkel era. A clear indication was seen when President Putin described her decision to admit many refugees in 2015 as a “cardinal mistake”, in an interview at the end of June 2019, just days before he met her at the Osaka G-20 Summit.

Recent reports on the state of her health also confirm this trend. The certainty in Germany’s Atlanticist orientation and its strong stance on Russia might now be in doubt. Recent polls in Germany show that there is more confidence in President Putin than in President Trump. In May 2019, she reiterated her earlier concerns that “the old certainties of the post-war order no longer apply”.

Germany has also not been spared the populist wave in the European Union. Growing anti-EU and anti-NATO sentiments in Germany were borne out by the results of the 2017 Bundestag (Parliament) elections. The right-wing Alternative for Germany (AFD) became the third largest party in the Bundestag, with 12.6% of the vote.

The Left (Die Linke) with 9.2% of the vote, are critical of the EU, NATO and the US. Both parties represent a significant body of constituents who are not wedded to the long-held notion of a post-war Germany anchored in the EU and NATO with strong links to the US.

Russia perceives NATO as hostile and threatening to its security, after its expansion eastwards to include the Baltic, Central and Eastern European states. As a great power, it is probably more comfortable dealing with European countries on a bilateral basis than with a united and stronger whole.

There could be economic, political and strategic changes in the Asia-Pacific, depending on the depth and nature of a new Russo-German relationship. The pace and importance of Russo-Chinese relations could slow down. Russia could develop its economy with German know-how and finance.

A Europe without Germany would also lose focus on the Asia-Pacific and is likely to turn inward. ASEAN, by extension, would be the poorer for it, in terms of a potential loss of important economic and political partners.

*Chris Cheang is a Senior Fellow with the S. Rajaratnam School of International Studies (RSIS), Nanyang Technological University (NTU), Singapore. A retired diplomat, he had served in the Singapore Embassy in Moscow as well as Bonn.