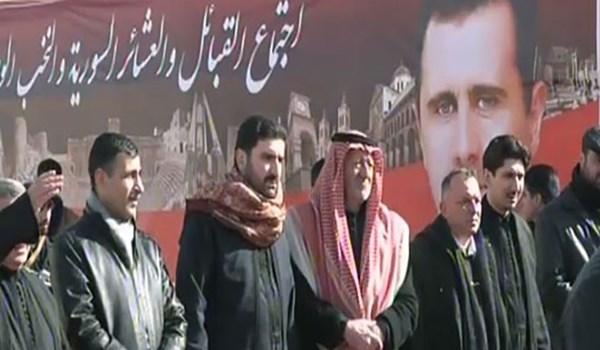 TEHRAN (FNA)- The Syrian Arab tribal leaders in a statement voiced their support for the Damascus Army, and dismissed foreign interference for the creation of a safe zone in Syria.

The Syrian Arab tribal leaders in a meeting in the town of Lebanon al-Hes in Southern Aleppo voiced their strong opposition to any US-Turkish plot to disintegrate Syria or set up safe zones inside Syria.

The Arab tribes reiterated that the Syrian nation will not tolerate Turkey’s interference under the pretext of creating a safe zone in Syria, and called for reinforcing Syria’s resistance forces and tribes to confront the Turkish-US plans.

In a relevant development earlier in July, the tribal leaders in Deir Ezzur voiced strong opposition to the Saudi plots to support the Syrian Democratic Forces (SDF)’s separatist measures in the Eastern parts of the province.

The Arabic-language al-Watan newspaper reported that al-Jamel tribe in Eastern Deir Ezzur has issued a statement to emphasize its opposition to the appointment of SDF-affiliated Ahmed al-Khabil as the Sheikh of al-Bakir tribes in Eastern Deir Ezzur and the head of Syria’s military democratic council.

Al-Jamel tribe has referred in the statement to the terrorist acts by the SDF in Eastern Euphrates region, and said that it does not recognize al-Khabil who has been appointed with the support of Saudi Minister for Persian Gulf Affairs Thamer al-Sabhan and the terrorist militias as the Emir of al-Bakir Sheikhs.

Other Syrian tribes had also earlier stressed their opposition to al-Khabil’s appointment.

Meantime, the Arabic-language al-Baladi news website affiliated to the militants reported that one of the leaders of Syria’s Arab tribes namely Obaid Khalaf al-Hissan was assassinated in the town of al-Ali Bajeliyeh in Tal Abyadh region in Northern Raqqa after stopping cooperation with the Kurdish forces in Eastern Euphrates.

It added that the SDF commanders had earlier attempted to return him.

Relevant reports also said in June that the Syrian tribes in Deir Ezzur province had stood against a Saudi-US plot to support the Kurds to decompose Eastern Euphrates from Syria.

The Arabic-language al-Ahd news website quoted the leader of al-Moshahedah in al-Jazeerah region in Eastern Euphrates Sheikh Heidar al-Hamadi as saying that all Syrian tribes, except a little number of them, had opposed the recent meeting by al-Sabhan to Kurdish-occupied regions to study plots to separate Eastern Syria from the country’s territory.

He underlined al-Sabhan’s attempts to coax the tribes in Eastern Syria into implementation of separatist plots, and said most of them want Damascus to retake control of the region.

Meantime, al-Watan newspaper reported that a Swedish delegation, including the country’s representative for Syria affairs, the Swedish foreign ministry official for Syria affairs and the official for the agency on international aid, have entered the Kurdish-occupied regions in Eastern Syria and held meetings with a number of commanders in line with the western states’ accelerated attempts to interfere in Syria’s internal affairs and assist the SDF in their separatist dreams.

Mohammad al-Akam, a senior Syrian legislator, said that a tripartite coalition has been formed among Saudi Arabia, the Kurdish forces and Israel under the US supervision which pursues pressures on Damascus after gaining victory over terrorist groups, by separating the Northeastern parts of the country.

Head of the politburo of Turkey-backed Lawa al-Mo’etasam-Free Syrian Army terrorists Mostafa Sejari wrote on his twitter page on Monday that Riyadh had stopped financial support for the terrorist groups in Northern Syria in line with a fresh scheme to help Kurds cut off Eastern Syria from the mainland after a Saudi-US delegation met in Deir Ezzur.

He added that Saudi Arabia had decided to cut financial support for the regions occupied by the terrorist groups in Northern Syria.

He added that the measure was adopted after Riyadh started support for the separatist Kurdish groups in Northeastern Syria following a visit by al-Sabhan to Kurdish-occupied regions.

Sejari underlined that Saudi Arabia wants to pressure Turkey, warning, “All of us will be harmed by this measure.”