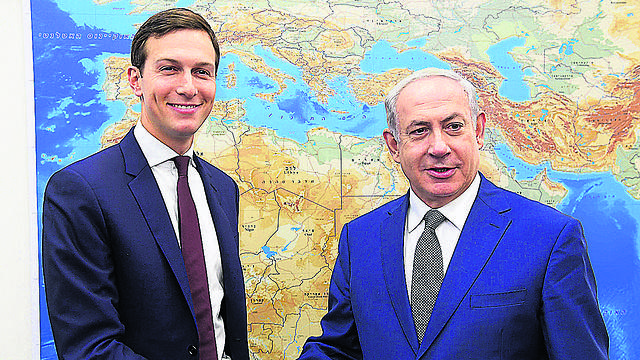 Analysis: The White House may have taken unilateral steps that make the Palestinians reject any claim of impartial mediation, but ultimately, his Mideast policy will likely follow the same disinterested trend as his predecessors

Between the major news stories, it was reported this week that the head of the U.S. team for Mideast peace, Jared Kushner, would arrive in the region to meet with the parties and continue the administration’s efforts to “advance the peace plan,” which is affectionately – and with no basis in reality – referred to as the “deal of the century.”

In reality, this is the “Loch Ness plan,” named after the fictional monster that resides in Loch Ness in northern Scotland.

As in the case of the monster, there are hundreds of people who claim to have seen the plan, dozens who swear they can describe exactly what it looks like, and a chosen few who can actually explain its existence.

But like the monster, there really is no such thing as “the deal of the century.”

There are likely to be working papers and a number of potential outlines, and it is fair to assume that there are ideas, some of which may even be good. But a well-organized and viable policy plan? Doubtful.

At the outset, Trump was right on one basic and essential fact: The diplomatic process, in the form it has taken since the Oslo Accords, has exhausted itself and ultimately failed.

The reasons for this are irrelevant, but if you want to break down paradigms and frameworks, you need to think creatively. Yet the lack of seriousness and the problematics began immediately.

A president who defines the topic of the Middle East as an American interest and gives it a presidential commitment and diplomatic capital, would build a team accordingly, and delegate authority to the secretary of state, national security adviser, mediator or special envoy and an experienced staff.

That president would not appoint his son-in-law and two lawyers – real estate and bankruptcy – and expect dizzying diplomatic success, certainly not when their political leanings are well-known in advance.

A series of unilateral measures and statements have, in the eyes of the Palestinians, damaged the image of United States as an impartial mediator:  Moving the embassy to Jerusalem; making significant cuts in funding for security cooperation with the PA; insisting on not declaring a commitment to the two-state model as previous governments have done for 40 years; recognizing Israel’s right to annex parts of the West Bank; refraining from setting up a mechanism for consultations with the Palestinians; refusing to share the plan with Jordanian King Abdullah; blaming the Palestinians in countless tweets by envoy Jason Greenblatt, echoing from Washington remarks by Benjamin Netanyahu that “it is proven that Iran, not the Israeli-Palestinian conflict, is the central issue facing the Middle East.”

Maybe all of that is true, but that’s not how a plan is constructed. Maybe these moves are justified, but when you look at it all as a whole, it’s easy to understand why the Palestinians have concluded that the administration is neither serious in its intentions nor objective.

American governments, from President Lyndon Johnson after the Six-Day War to President Barack Obama, have maintained a semblance of balance and neutrality when it comes to fundamental, objective negotiations.

Even when they released summaries and conclusions – such as the “Clinton Parameters” of December 2000 – that were clearly leaning toward the Israeli side, they balanced it with a vision for a future where “two states are living in peace and security side by side.”

It is possible to support or oppose a Palestinian state, to assume that it is still viable or not, but one cannot ignore the principle of a “Palestinian state” promised by American and Israeli governments.

Nor can one expect the Palestinians to discuss a plan based on ephemeral concepts of economic development involving tens of billions of dollars whose origins are unclear, without mentioning political sovereignty.

U.S. presidents in recent years have tended to follow a common pattern when it comes to Middle East policy: disinterest stemming from a lack of distinct American interest, and a trend of withdrawal from the region. Ultimately, there is no reason to assume that Trump will be any different.