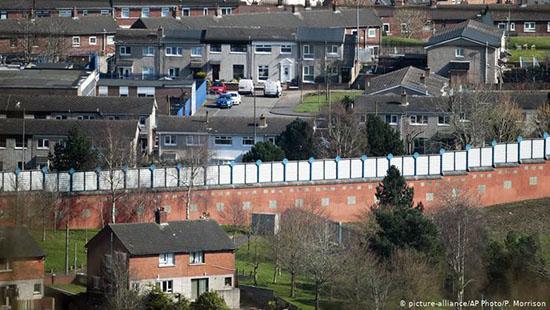 Northern Ireland is arguably both the most perilous, and the least soluble Brexit riddle taxing the UK prime minister. Even his more modest goal of convincing the power-sharing government to reconvene looks unlikely.

“It’s like a marriage where we still sleep in separate rooms,” a taxi driver says, gesturing towards the “Peace Walls” separating one of comparatively few nationalist, predominantly Catholic residential areas from the loyalist and largely Protestant homes that make up most of eastern Belfast. “I don’t think that will ever really change.”

These dividing walls, many of them adorned with overtly political graffiti or murals, offer a stark reminder of Belfast’s troubled past on the drive out of the city towards the seat of government, Stormont Castle.

Stormont’s power-sharing government, a coalition of the nationalist Sinn Fein seeking a united Ireland and the loyalist Democratic Unionist Party (DUP) determined to remain a part of the UK, collapsed well over two years ago.

Boris Johnson sought on his first visit to Northern Ireland as prime minister to end this deadlock and bring Stormont back into session.

“My prime focus this morning is to try and get that up and running again, because I think that’s profoundly in the interests of all citizens of Northern Ireland,” Johnson said on arrival. “I expect Brexit may come up a little bit, I don’t rule that out.”

In a sign of the challenge facing the prime minister, he made no public comments on departure. A spokesperson said Johnson had told all the major parties that despite constructive progress in Wednesday’s talks, “there now needed to be serious and intense engagement to get this done.”

If Stormont has not reconvened, and if Johnson plans to follow through on his “do or die” October 31 deadline for Brexit, that would require Westminster imposing direct rule on Northern Ireland in order to legislate the exit. Such a move could prove fiercely unpopular.

The president of Sinn Fein, Mary Lou McDonald, gave a statement in front of a varied group of protesters. “The challenge now is for the British prime minister, and for his secretary of state [for Northern Ireland, Julian Smith], and for the whole system to act demonstrably in the common good. Do I have a sense that that’s what their intention is? No, I don’t. I don’t believe that we heard anything that would give us any great grounds for hope,” she said.

McDonald said that talks with Johnson led her to believe he was now steering towards “a disorderly and a crash Brexit,” calling for an immediate referendum on Irish unity in that event. For years, polls suggested that an Irish unity referendum would result in a fairly clear defeat for nationalists seeking a split from the UK. However, Northern Ireland as a whole voted narrowly in favor of remaining in the EU in 2016’s referendum, and the likely disruption at the Irish border in the event of a “no-deal” Brexit could conceivably alter the arithmetic.

“He tells us that he will act with absolute impartiality; we’ve told him that we don’t believe that,” McDonald said.

Why is impartiality in question?

Even beyond Northern Ireland’s status, the DUP and Sinn Fein have the capacity to disagree on seemingly any issue. The DUP is a highly conservative party in most matters, while Sinn Fein leans well to the left. To give an idea of the scope for discord, Sinn Fein is currently lobbying for new Northern Irish laws recognizing gay marriage and allowing access to abortion — hardly typical causes for a mainly Catholic party to champion.

Besides the historical reasons, Sinn Fein’s doubt in Downing Street’s impartiality has redoubled since Britain’s 2017 election. After Theresa May and the Conservatives failed to secure a parliamentary majority in Westminster, they were forced to turn to the DUP to support their government in the form of a confidence-and-supply agreement.

Sinn Fein wins several seats in Parliament at every UK election, but never sends MPs to the Westminster chamber, as it doesn’t recognize its sovereignty over Belfast.

Complicating this issue further is the arrival of Johnson and his new-look approach to the stalled Brexit process. Johnson’s tougher Brexit rhetoric more closely mirrors that of the DUP than May’s did. In particular, the new Conservative government’s efforts to pressure the Republic of Ireland and the EU to soften their stance on the need for a “backstop” to prevent the need for checks at the Irish border is anathema to Sinn Fein, which sees this as a threat to the existing ties with its southern neighbor.

The DUP’s Arlene Foster went on the Republic of Ireland’s RTE television on Wednesday morning to make precisely this case. “Let’s be clear, nobody wants a no-deal situation,” she said. “We want to find a way forward that’s good for the UK, including Northern Ireland, and is good for the Republic of Ireland as well. Unfortunately, what we have met thus far is a belligerence and an intolerance towards Northern Ireland from Dublin, saying ‘it’s the backstop or nothing.'”

Foster was also asked about the Stormont impasse, the primary focus of Johnson’s visit on Wednesday. “It’s not a question of supporting the reintroduction of direct rule,” Foster said. “Direct rule will come if there is no Stormont by October 31. It’s not OK by me because I want to see devolution restored immediately.”

One of the terms of the 1998 Good Friday Agreement that largely stopped decades of political and sectarian violence was that both of Northern Ireland’s largest parties — invariably the DUP and Sinn Fein — must rule in a coalition. It’s never been an easy alliance, to put it mildly, but little in Belfast on Wednesday suggested that Johnson’s input had brought the parties closer together exactly three months before the current Brexit deadline could tear them even further apart.