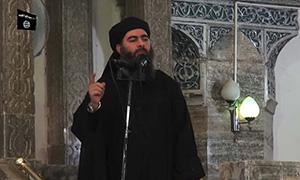 “Al-Baghdadi together with a number of his Arab and foreign aides are presently in Syria as he is feeling too much danger after several ISIL commanders were killed in Iraqi Army’s military operations on ISIL’s hideouts in Western Iraq,” Head of Iraq’s Intelligence Forces Abu Ali al-Basri told the Arabic-language al-Sabah newspaper on Monday.

He noted that al-Baghdadi has now taken a defensive position under threat by Iraq’s intelligence forces, escaping battle with the Syrian and Iraqi armies.

Al-Basri noted that al-Baghdadi is still very much popular among his foreign, Arab and Iraqi militants, and said that the ISIL ringleader is now replacing some his commanders after he lost a number of his militants and aides in a joint military operation by the Iraqi intelligence forces and the Syrian Army.

He reiterated that al-Baghdadi has been paralyzed after he sustained a spinal cord injury in the Iraqi forces’ attack on a meeting between him and his aides in al-Hojin region before the ISIL left the region in 2018.

In a relevant development in early June, the Iraqi sources reported that al-Baghdadi was hiding in the Western deserts of al-Anbar province at the border with Syria.

The Arabic-language al-Ma’aloumeh news website quoted an intelligence source in Hashd al-Shaabi (Iraqi popular forces) command center in al-Anbar province as saying that according to the latest intel, al-Baghdadi had sheltered in a hidden tunnel in al-Husayniyat region in the Northern parts of the town of al-Ratbah in Western al-Anbar.

He added that “the security forces are mulling operations to take control of the tunnel”, and said that given the heavy deployment of security forces in al-Ratbah region near the border with Syria and closure of all roads, al-Baghdadi and the militants under his command cannot escape.

The source underlined that given the fact that the US fighter jets have not bombed the ISIL’s hideouts and tunnels in the region, the American forces are likely aware of his presence in al-Ratbah desert areas.

The speculations come after al-Baghdadi made his first appearance in April, after five years of absence, in a video in which he acknowledged the defeat of the terrorist group’s fighters in the battle for Baghouz in Syria.

The video was reportedly filmed earlier in April.

In recent years, Baghdadi’s death has been reported multiple times, however, the terrorist leader has re-emerged time and time again.

The Sun claimed, citing Zaid Hamid, who is a co-founder of the BrassTacks threat analysis think-tank, last month that al-Baghdadi is allegedly hiding in a distant region of Afghanistan.

“Note the style of the bedding and the pillows….Is he already in Afghanistan?” Zaid Hamid pointed out.