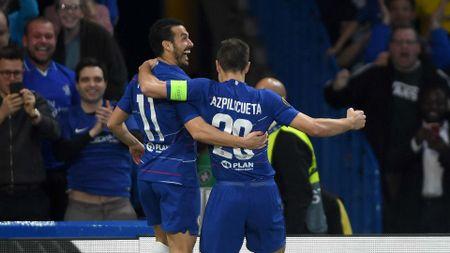 Frank Lampard’s side claimed an entertaining 5-3 victory in Austria but it was Pedro’s outrageous backheel which will steal all the headlines.

The Blues were 3-1 up in the second half when the 32-year-old connected with a floated ball into the box before flicking it into the net in some style.

Earlier, Christian Pulisic scored his first goal since joining Chelsea for £58m from Borussia Dortmund in the 28th minute while Ross Barkley doubled the advantage from the spot.

Pulisic, 20, bagged a second before the break and although Jerome Onguene pulled one back, Pedro made the game safe with his stunning finish.

Takumi Minamino grabbed a brace for the hosts either side of a Michy Batshuayi goal to make the scoreline respectable.

Tottenham lifted the Audi Cup after beating Bundesliga champions Bayern Munich on penalties following a 2-2 draw at the Allianz Arena.

Mauricio Pochettino’s side, who beat Real Madrid 1-0 to reach the final, built a two-goal lead in normal time thanks to goals by Erik Lamela and Christian Eriksen, but Bayern fought back through Jann-Fiete Arp and Alphonso Davies.

Liverpool run out winners in Geneva

Liverpool ended their pre-season on a high with a confidence boosting 3-1 win over Lyon in Geneva where Roberto Firmino, Mohamed Salah and Alisson returned to action.

After four games without a win in pre-season, the switch to the Alps and the return of their big guns triggered an upsurge in performance level for the Reds. Sadio Mane was the only notable absentee as he has yet to return after his African Cup of Nations exploits with Senegal.

Firmino spared the blushes of Alisson – whose early gaffe handed Lyon a penalty, converted by Memphis Depay (4) – with a tidy finish to level the scores (17). That settled Jurgen Klopp’s men down and a comical Joachim Andersen own goal put them in charge before Harry Wilson cracked in a stunning 25-yard effort (53).

Arsenal win on penalties after being held in France

Arsenal were held 1-1 with Angers but won on penalties in a game designed as a celebration of the French club’s centenary.

Reiss Nelson grabbed the Gunners’ goal when he followed up from close range to cancel out Farid El Melali’s opener.

Arsenal face Barcelona in their final pre-season match on Sunday before their Premier League opener against Newcastle.

Pablo Fornals and Sebastien Haller both found the net as West Ham and Hertha Berlin served up an entertaining encounter which the Hammers won 5-3.

Pascal Kopke edged the Germans in front early on but Fornals levelled four minutes later when finishing from close range after being picked out by Haller.

Davie Selke’s burst and classy finish put West Ham on the back foot but again Haller and Fornals linked up to bring the Hammers level. Their interchange of passes set up Manuel Lanzini to fire home from 22 yards.

Kopke made it 3-2 after the break but Robert Snodgrass’ cross was headed home by Haller to draw the scores level again.

West Ham then took over in the final 10 minutes with Grady Diangana and Michail Antonio firing home to end an entertaining pre-season encounter.