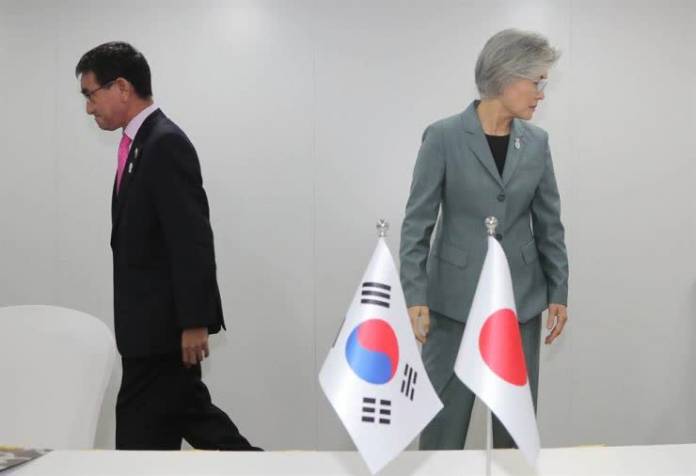 The Korea Times -The top diplomats of South Korea and Japan failed to narrow differences in a rancorous trade row during their highly charged talks in Thailand on Thursday, the eve of Tokyo’s possible decision on whether to strip Seoul of a preferential trade status.

Foreign Minister Kang Kyung-wha and her Japanese counterpart, Taro Kono, met in Bangkok on the margins of annual multilateral talks involving the 10-member Association of Southeast Asian Nations (ASEAN), as Seoul is beefing up diplomacy to reverse Tokyo’s recent export curbs and its consideration of additional steps against the neighboring country.

Tensions were palpable at the start of their talks as evidenced by their faces imbued with unusual seriousness and their perfunctory handshake with no smiles.

The talks came a day before Tokyo is expected to finalize its decision on whether to remove South Korea from its “whitelist” of 27 countries given preferential treatment in purchasing Japanese dual-use products that can be diverted for military use.

“(I) clearly made the request (against removing Seoul from the whitelist), and clearly stated that should that decision be made, there would be grave ramifications on the bilateral relations,” Kang told reporters after the 45-minute meeting.

“If countries have problems, they should seek a solution through consultations, and (I) clearly said that there needs to be time and room (for us) to make such efforts,” she added.

Taking Seoul off the whitelist is bound to exacerbate an already rancorous trade row that was triggered by Tokyo’s July 4 imposition of new restrictions on exports of three high-tech materials vital to the manufacturing of semiconductors and displays.

An official at Seoul’s foreign ministry said that there “did not appear to be any big change” in Tokyo’s position over the ongoing trade row. He also said that chances appear “considerable” that Japan would press ahead with its move to drop Seoul from the whitelist.

“I can say that the gaps between the two sides still appear to be considerable,” the official told reporters on condition of anonymity.

An escalation of the trade dispute could pose a difficult quandary to the United States, which has been seeking to tighten security cooperation with its two Asian allies, particularly in the wake of the North’s recent missile launches.

In an apparent move to help the two allies patch things up, the U.S. has reportedly called for South Korea and Japan to consider signing a “standstill” agreement to give them more time to negotiate a solution.

But Japanese Chief Cabinet Secretary Yoshihide Suga denied reports that the U.S. had asked Japan and South Korea to mull such an agreement to stall for time.

At their talks, Kang and Kono also discussed the issue of a bilateral military intelligence-sharing agreement. Seoul has hinted that it could review whether to renew the agreement, which is supposed to be automatically renewed unless either side opposes the renewal.

Japan has justified its export restrictions, accusing Seoul of laxity in its export control and citing an “erosion of trust” in bilateral relations.

Kang will use a series of ASEAN-related meetings to highlight the importance of free trade principles as part of Seoul’s diplomacy to stop Japan’s recent export restrictions and its consideration of additional retaliatory steps.

On Thursday, Kang will attend the South Korea-ASEAN foreign ministers’ meeting. Aside from the multilateral talks, she also plans to bilaterally meet Chinese Foreign Minister Wang Yi and her counterparts from Brunei and the European Union.

The following day, she will join the ASEAN Plus Three meeting, which includes South Korea, China and Japan; the East Asia Summit (EAS) session and the ASEAN Regional Forum (ARF). On Saturday, she is to attend the South Korea-Mekong foreign ministers’ meeting. (Yonhap)