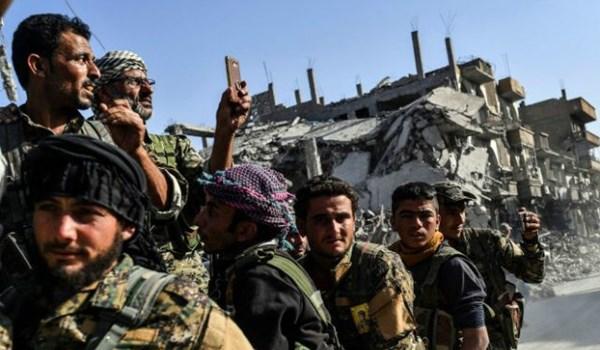 TEHRAN (FNA)- The Turkish Army troops have withdrawn from areas under their control in Northern Hama as the Syrian government forces have made advances in the region, the Arabic-language media outlets reported.

The Arabic-language Al-Watan newspaper quoted a Syrian Army battlefield source as saying that the Turkish occupying forces have retreated from areas under their control in Mourek region in Northern Hama in a military convoy comprising 15 military vehicles towards borders with Turkey as the Syrian Army has recently made advances in al-Jobin and Tal Malh in Northern Hama.

Meantime, a group of other Syrian troops backed by the Syrian Army’s artillery and missile units heavily pounded the terrorists’ military positions in the town of al-Zuka and engaged in fierce clashes with the militants in the Northeastern part of al-Jobin and Tal Malh towns in Northern Hama, taking control of several regions, including Abu Raideh Farms near al-Zuka.

The Arabic-language website of the Russian Sputnik news agency, meantime, quoted a battlefield source as saying that the Syrian Army’s artillery and missile units pounded the Turkistasni party’s military positions in Kabani hills in Northeastern Lattakia and cut their movements.

The source noted that the Syrian Army troops are preparing to attack the terrorists’ military positions and win control over the strategic hilltops in al-Zawiqat, Tal-e al-Syriatel and Heights 1154.

He said that if the Syrian Army takes full control of the mentioned hilltops, it will complete its control over Kabani strategic heights.

In a relevant development in mid-July, media reports said that Damascus and Moscow have given a last chance to Ankara to fully conduct its military operations in Idlib province before the upcoming Astana meeting on Syria.

Al-Watan newspaper quoted special sources as saying that the new round of Astana meeting in Kazakhstan’s capital would be held on August 1-2 and it would be the last chance for Turkey to fulfill its commitments under the Russia-Turkey agreement on Idlib.

The sources noted that the delays by Turkey in implementing the Sochi agreement are not acceptable, and said that if Ankara does not fulfill its commitments, the Syrian Army will most probably conduct its cleansing operation in the remaining regions of Idlib.

Meantime, the daily quoted sources close to Ankara as saying that the Ankara-backed terrorist commanders attended a meeting with Turkish Army commanders in the Turkish capital earlier this week.

They said that the Turkish Army intends to maintain the areas under its control in Northern, Northwestern and Southern Idlib as long as possible before the next meeting.

The sources also pointed to Turkey’s fear from possible military operations by Russia and Syria to take full control over the towns of Jabal Shahshabou in Northwestern Hama to Jisr al-Shoghour along Aleppo-Lattakia highway, and said that Turkey has promised Tahrir al-Sham and other terrorist groups to send fresh militants of Euphrates Shield and Olive Branch from Aleppo to these regions.