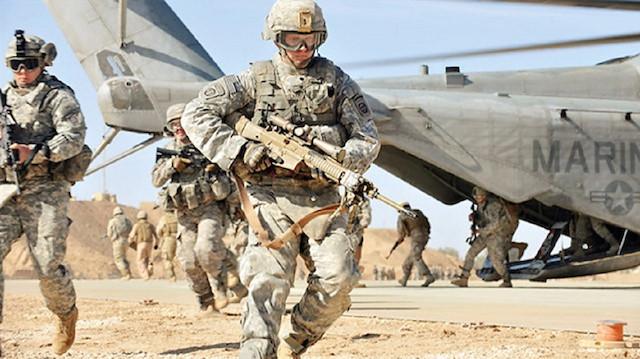 Yeni  Safak – Kılıçarslan says U.S. preparations are starting to resemble those that preceeded the invasion of Iraq in 2003, stressing that threats and risks are increasing with every passing day.

The U.S. is set to deploy at least 60,000 soldiers in Syria from its bases in Doha, the Mediterranean and Basra, according to a former Turkish genreal.

Speaking exclusively to Yeni Şafak daily, retierd Special Forces Commander General Abdullah Kılıçarslan said that the 25,000 truckloads and hundreds of planeloads of weapons and vehicles dispatched to Syria by Washington are meant for the 60,000 soldiers that will be deployed in the northeast as part of the U.S.’s Syria occupation plan.

Kılıçarslan said U.S. preparations are starting to resemble those that preceeded the invasion of Iraq in 2003, stressing that threats and risks are increasing with every passing day.

The foundations were laid gradually

“These equipment and weapons are currently awaiting U.S. soldiers that will be dispatched to Syria from the Doha base, the Mediteranean and the Gulf of Basra,” according to Kılıçarslan.

“Their aim is to establish an occupation corridor that encompasses the southeast. They have been gradually laying the foundations of this plan for the past 30 years,” continued Kılıçarslan.

Turkey must draw the borders

Kılıçarslan pointed that the same operation that was carried out by the U.S. in Iraq 30 years ago is still ongoing.

“The same trap is being attempted again in Syria. The U.S. cannot be trusted, we have zero chance of seeing eye-to-eye with them. We’re losing time as we speak. Turkey must urgently intervene in the region and must draw the borders of its own safe zone as it destroys terror elements that pose an open threat,” according to Kılıçarslan.

The first “corridor trap” by the U.S. was set against Turkey in 1991, according to Kılıçarslan.

“The U.S. administration at the time mobilized in order to establish a buffer zone on our borders before the Iraq invasion in order to open up the field for the PKK.”

“If it weren’t for Turkish soldiers that foiled the establishment of a terror corridor that extends from Syria’s coastal Latkia all the way to Ayn al-Arab, Manbij, Qamishli, Ras al-Ayn and Shaddadi, the whole of the Middle East would have been embroiled in even more chaos and disasters,” continued Kılıçarslan.

‘They’re to flee as they did in Iraq’

Kılıçarslan pointed that the U.S. had set up similiar bases near the border with Iraq in the past.

“Necessary interventions were carried out during that period through the resolve demonstrated by Turkey. I witnessed first hand how they fled all the positions that were being run by the U.S., and after the operation to be carried out against the terror corridor in Syria, they’ll be forced to flee regions they occupy again,” concluded Kılıçarslan.

The U.S. continues to deploy fresh weapons to terrorists, especially the PKK/PYD-YPG, despite its pledge to retrieve the weapons it gave to terrorist groups in northern Syria.

Although the date set for the Aerican troop pullout from Syria has passed, the U.S. is yet to reduce its military presence in Syria.

In its more than 30-year terror campaign against Turkey, the PKK has taken some 40,000 lives, including many women and children. The YPG/PKK is its Syrian branch.