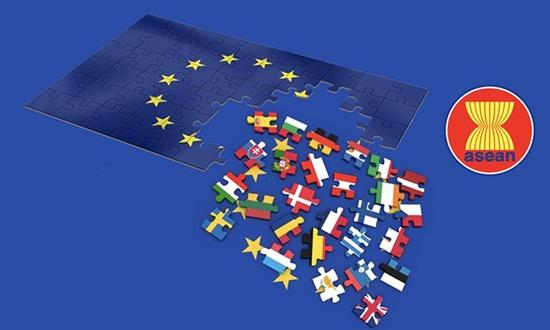 As foreign ministers pow-wow in Bangkok, there are more reasons for the world’s biggest blocs to stay apart than come together

As Federica Mogherini, the European Union (EU) high representative for foreign affairs and security policy, takes part in the Association of Southeast Asian Nations (ASEAN) Regional Forum in Bangkok today (August 2), there are questions about whether the EU’s commitment to working multilaterally with the bloc is paying off.

Those questions come as Brussels looks instead to improve bilateral relations with individual Southeast Asian nations, namely through free trade agreements. (FTAs). At the previous EU-ASEAN ministerial meeting, in January, Mogherini said the “two most advanced and most successful integration processes in the world stand firmly behind multilateralism and a rule-based global order.”

Last year, the EU was ASEAN’s second largest trading partner, trailing only China. Bilateral trade in goods was worth about $263 billion in 2018.

“We represent two of the most successful regional organizations in the world. We share values and common goals,” Vivian Balakrishnan, Singapore’s Foreign Affairs minister who serves as ASEAN’s coordinator for EU relations, said in January.

But on trade, a planned EU-ASEAN FTA, over which talks began in 2007, is looking increasingly like an unachievable goal, despite the EU signing trade deals with Singapore and Vietnam this year.

Talks are ongoing with Thailand and Indonesia, while there are suggestions that negotiations with Malaysia and the Philippines, which broke down some years ago, could be restarted.

According to the European Commission, these bilateral deals are “building blocks towards a future EU-ASEAN agreement, which remains the EU’s ultimate objective.”

But the chances of a bloc-to-bloc deal are fading away, analysts say.

“I do not see this possibility of a bloc-to-bloc FTA in the short term, unless there is a view change from the EU,” said Suthiphand Chirathivat, the executive director at the ASEAN Studies Center at Chulalongkorn University in Thailand.

In some respects, if free trade deals are signed with all of the aforementioned six Southeast Asians nations, the bloc’s largest economies, there isn’t much need for a bloc-to-bloc agreement.

Last year the EU’s bilateral trade with each of those six countries accounted for 95% of all EU-ASEAN trade.

“Bilateral is the only viable option in trade given the problems in ASEAN countries,” said Bridget Welsh, John Cabot University’s associate professor of political science. “Keep in mind Cambodia and Myanmar are facing restrictions so ASEAN as a vehicle for trade negotiations is out.”

Indeed, relations with the four other ASEAN members, which account only for 5% of EU-ASEAN trade, are increasingly fraught.

In February the EU launched an 18-month review of whether Cambodia should remain part of its preferential Everything But Arms (EBA) scheme, which removes tariffs from Cambodian exports into Europe. This comes after political regression in Cambodia over the past two years.

The EU is also considering whether to remove Myanmar from its EBA scheme following mass human rights abuses against the country’s Muslim Rohingya minority starting in 2016.

The problem with an EU-ASEAN FTA, analysts say, is that Brussels would lose its leverage over individual states as it is forced to treat all on the same terms.

Indeed, given the widely discrepant standards of human rights and democracy in Southeast Asia, a one-size-fits-all deal would reward the worst offenders with better trade terms without asking for any political progress in return.

But bilateral deals, such as the one signed with Vietnam in late June, means the EU can cherry-pick and more strictly enforce human rights reforms that it wants to see in return for improved trade terms.

The EU is relatively secure when it comes to emphasizing its trade importance in Southeast Asia. The bloc is ASEAN’s second largest trading partner, and also the biggest investor in the region, with a total portfolio of $374 billion at the end of 2017.

The bloc is also close to signing the ASEAN-EU Comprehensive Air Transport Agreement, which will simplify transport rules between the two blocs and open the way for increased investment.

Apart from trade, the two regional blocs’ relations are less firm. In part, this stems from the markedly different ways the two blocs operate. The EU tends to be dominated by Germany and France, and their leverage will become even stronger once Britain leaves the bloc, expected on October 31.

Whereas ASEAN is explicitly designed to be consensus-driven, in which member states do not get involved in the domestic affairs of others, but that allows members states to block any decision that goes against its interests and impedes the organization’s effectiveness in dealing with regional issues.

The glacial pace of trying to forge a united stance on South China Sea disputes is a case in point. Cambodia and Laos, Beijing’s two most loyal allies, have tended to disrupt cohesion.

Southeast Asians jest that the only time they feel part of an ASEAN community is during the SEA Games, a regional sporting event that takes place every two years. More unspoken, relations are also complicated because of Southeast Asian distrust of Europe.

“For a long time, ASEAN’s opposition to EU membership has been an expression of doubt about its coherence, given the EU’s unfortunate record of over-promising and under-delivering,” wrote Eva Pejsova, a senior analyst at the European Union Institute for Security Studies, a think tank, in June.

“Moreover, given the fact that ASEAN is currently highly sought after by countries such as Japan, the US, India and Australia, it simply does not consider Europe, still a marginal global security actor, as a critical player,” she added.

Brussels clearly understands its security deficiencies. In Mogherini’s speech to the EU-ASEAN Post-Ministerial Conference on August 1, she spoke at length about making the EU into a respected and reliable security partner for ASEAN.

It isn’t that EU security ties with the region are nonexistent. It has organized several EU-ASEAN High Level Dialogue (HLD) on Maritime Security Cooperation sessions, among several other joint security talks.

But the EU is still lobbying to have a seat on the ASEAN Defense Minister’s Meeting (ADMM) Plus Experts’ Working Group, and also to attend the regular East Asia Summits. At the EU-ASEAN ministerial meeting in Brussels in January it was agreed “in principle” to upgrade EU-ASEAN relations to a “strategic partnership.”

But Malaysia and Indonesia, two of ASEAN’s main power-brokers, are lobbying against the measure in protest of the EU’s decision to phase out imports of palm oil in biofuels. The pair are the world’s two biggest producers of palm oil, and are currently threatening to take the EU to the World Trade Organization over what they see as a discriminatory ban.

As with trade, the EU appears to be focusing more on bilateral than multilateral defense deals that perhaps could serve as “building blocks” for stronger bloc-to-bloc agreements in the future.

On August 5, Mogherini will sign a bilateral defense agreement with Vietnam, the EU’s fourth such deal with an Asia-Pacific nation, which will allow Vietnam to take part in the EU’s crisis management operations.

“I expect it to be the first of many with our friends in ASEAN,” Mogherini told regional media earlier this week.