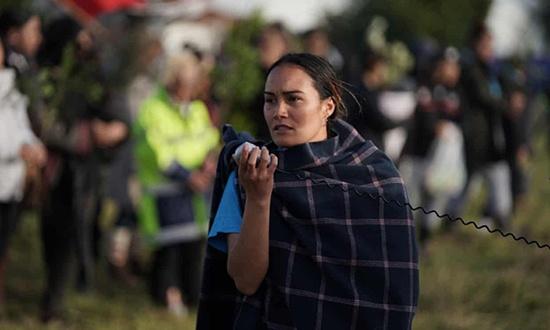 The leader of a major Indigenous land dispute in New Zealand has criticised Jacinda Ardern’s government for its lack of action on confronting systemic Māori disadvantage, and says the Māori nation is in “a state of emergency” and “crisis”.

Hundreds of activists camped out in tents and cars continue to occupy a sliver of land at Ihumātao in South Auckland – land they say is sacred to Māori, but which has been sold to a private developer and slated for private housing.

Pania Newton, 29, co-leader of activist group SOUL [Save Our Unique Landscape], says Māori are fed up with the crown’s lack of action on improving the lives of the country’s Indigenous people, including the forced removal of Māori infants into state care, over-representation of Māori in mental health and suicide statistics, and numerous land disputes nationwide.

“The Māori nation is in a crisis. It is a state of emergency for the Māori nation,” said Newton, who traces her ancestral ties to Ihumātao back to the very first Polynesian settlers of New Zealand, who set up market gardens on the fertile land, just 5km from what is now the country’s largest airport.

“We’re not taken seriously within these colonial and capitalist structures. And patriarchy comes into that as well.”

Key leaders of SOUL and the occupation of Ihumātao are women aged under 40. Newton says this is no coincidence, and Māori women have a distinguished history of leading struggles against the crown, and patriarchal rule.

Pania Newton leads a determined collective of protectors in the fight to save Ihumātao.

“And that’s why we call on Jacinda Ardern to show some leadership here at Ihumātao as a woman. As our leader of Aoteroa. She needs to take heed of what is happening here.”

Last week Ardern asked Fletcher Building to halt any further development until the stand-off was resolved.

The company obliged, but the PM has been criticised for failing to visit the peaceful occupation, and her Labour coalition government has drawn increasing ire for failing to improve the lives of the country’s Indigenous people – despite having the most Māori MPs of any political party in New Zealand’s history.