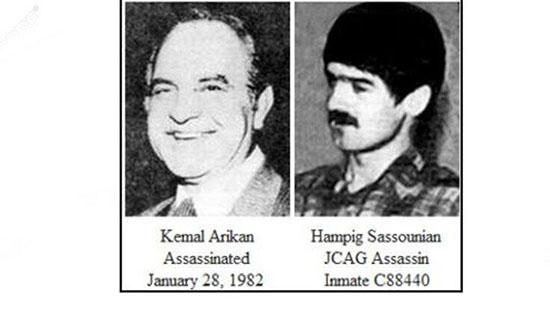 A U.S. court has denied a parole request of a Lebanese-Armenian convict who murdered a Turkish diplomat in the 1980s.

The California Board of Parole Hearings on June 29 denied Hampig ‘Harry’ Sassounian’s request for release on parole from San Quentin State Prison, where his is serving a life sentence for the 1982 murder of Los Angeles Consul General Kemal Arıkan.

The board’s decision came on the grounds that Sassounian “constitutes a security risk,” according to lawyer Günay Evinç, the co-chairman of the Turkish American National Steering Committee (TASC).

TASC had previously launched a petition campaign, urging the denial of Sassounian’s request for conditional release.

Over 1,000 letters were sent to the board concerning the petition. The letters played a role in the court’s decision, according to Evinç.

On Jan. 28, 1982, Sassounian assassinated Arıkan as the consul general sat in his car at an intersection on Los Angeles, waiting at a traffic signal.

Sassounian belonged to the Armenian Secret Army for the Liberation of Armenia (ASALA), which operated from the beginning of the 1970s until the 1990s and targeted Turkishdiplomats in the United States and European countries.

Four similar parole requests were denied in 2006, 2010, 2013 and 2015. Nevertheless, in 2016, his request for conditional release was granted by a court in Los Angeles. Later, the decision was overturned by Jerry Brown, the governor of California.

The Armenian Secret Army for the Liberation of Armenia (ASALA) terrorist group killed 31 Turkish diplomats across the world between 1973 and 1986. The assassinations took place in the United States, Austria, France, Italy, Spain, Lebanon, Greece, Switzerland, the Netherlands, Canada, Portugal, Iran and the United Kingdom.