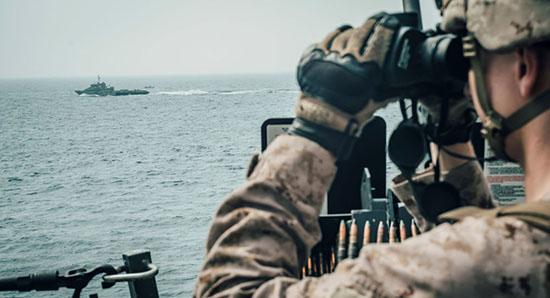 The US Department of Treasury introduced sanctions against Iranian Foreign Minister Mohammad Javad Zarif earlier this week in what Steven Mnuchin has described as a “clear message” to Tehran that “its recent behaviour is completely unacceptable”.

The General Staff of the Iranian Armed Forces has slammed the US sanctions against Foreign Minister Mohammad Javad Zarif, saying that Washington’s move was triggered by its failure to engage Europe in a new international maritime coalition against the Islamic Republic.

“The US has in recent months attempted to make the allied states accompany a naval coalition in the Strait of Hormuz and the Persian Gulf to endanger the international waterway like the past but the hidden opposition of the European and regional governments has angered the White House leaders. Their recent move to sanction the head of the Islamic Republic of Iran’s foreign policy apparatus will have no effect and they will remain alone on this path too”.

The statement followed the introduction of sanctions against the Iranian top diplomat on Wednesday when US Treasury Secretary Steven Mnuchin came up with a claim that Zarif, Tehran’s chief interlocutor on the international stage, is acting on behalf of the Islamic Republic’s supreme leader, Ayatollah Ali Khamenei.

“Zarif implements the reckless agenda of Iran’s supreme leader (Ayatollah Ali Khamenei), and is the regime’s primary spokesperson around the world. The United States is sending a clear message to the Iranian regime that its recent behaviour is completely unacceptable”, he said.

Zarif, who has been Iran’s foreign minister since 2013, mocked the US sanctions against him, “thanking” Washington for considering him such a “huge threat to [its] agenda”.

The country’s president, Hassan Rouhani, in turn, blasted the decision to sanction the foreign minister as “childish“, saying that the move meant that the US had “lost the power of rational thought”.

“They are afraid of our foreign minister’s interviews. It is completely clear that the foundations of the White House have been shaken by the words and logic of an informed, devoted and diplomatic individual”, the president said in a televised speech.

IRGC Issues Stark Warning to the US

The United States has been trying – unsuccessfully so far – to lobby European nations and other countries around the world to join its anti-Iranian international maritime framework, Operation Sentinel, which will operate in the Persian Gulf, the Strait of Hormuz, the Bab el-Mandeb Strait, and the Gulf of Oman to secure navigation routes in light of a series of “sabotage attacks” on oil tankers there. Washington blamed the alleged attacks on Tehran and its regional allies despite Iran’s consistent denial.

Washington has, meanwhile, received a stark warning from Brigadier Yadollah Javani, the head of the IRGC‘s political bureau, who said that there would never be a “US naval alliance in the Gulf or any of the region’s countries”, adding that the Iranian forces were the Gulf’s “security guardian”.

“If the United States makes any mistakes against Iran, it will confront Islamic Revolutionary Guard Corps throughout the region”, he said, elaborating that Tehran had informed the US and Israel that “any aggression” would be confronted “from the eastern Mediterranean to the Red Sea, the Arabian Sea, and the Gulf of Aden”.

In the meantime, while a number of countries have refused to follow the American strategy of “maximum pressure” against the Islamic Republic of Iran, the United Kingdom revealed its own plans to “put together a European-led maritime protection mission” in response to the Iranian seizure of a UK-flagged oil tanker in the Strait of Hormuz last month. The incident came weeks after London seized an Iranian vessel off the coast of Gibraltar.

The sanctions against Zarif and Washington’s relentless efforts to set up a naval force in the Gulf step up the US’ “maximum pressure” campaign against Iran. The policy kicked off in May 2018 with President Donald Trump’s unilateral pullout from the 2015 nuclear deal and subsequent reintroduction of sweeping sanctions dubbed “economic terrorism” by Tehran.

On the one-year anniversary of Trump’s withdrawal from the accord, Iran announced its own decision to partially suspend some of its voluntary commitments under the nuclear deal and gave the remaining signatories – France, Germany, the United Kingdom, Russia, China, and the European Union – 60 days to save the agreement by facilitating oil exports and trade with Iran.

As the deadline expired, Tehran said that it would begin enriching uranium beyond the 3.67 percent level set by the accord and warned it would gradually abandon its nuclear obligations every 60 days.

The Joint Comprehensive Plan of Action (JCPOA), commonly known as the Iran nuclear deal, was signed in 2015 by Iran and the P5+1 nations — Russia, the US, China, France, the UK plus Germany — after years of tense negotiations. The multilateral accord sought to curb Iran’s nuclear ambitions in exchange for the gradual lifting of economic sanctions on Tehran.