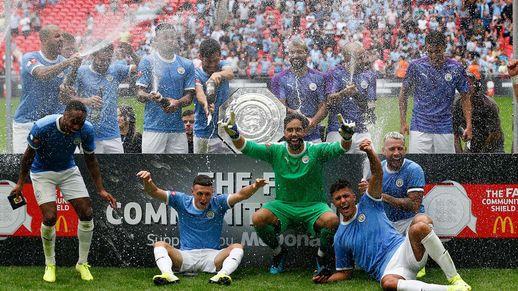 Sporting Life · Columnist
Claudio Bravo was the hero for Manchester City as he saved Georginio Wijnaldum’s penalty to give the Premier League champions the Community Shield.

Back-up keeper Bravo produced the only save in the shootout to see Pep Guardiola’s side defend their Community Shield title after a 5-4 victory to yet again pip Jurgen Klopp’s side to a trophy by the slimmest of margins.

Just as in the Premier League title race last season, there was nothing to separate the two sides as the game ended 1-1 after goals from Raheem Sterling and Joel Matip in a real game of two halves.

City controlled the first half but Liverpool dominated the second with plenty of chances at both ends throughout – Sterling also missing a sitter while Kyle Walker produced a dramatic goal line clearance to deny Mohamed Salah a winner in the second half.

Sterling scored a scrappy opener in the first half as Man City had the better of the contest in terms of both possession and chances, to rightly lead at the break.

The nature of the goal will be of no concern to Sterling who finally managed to score against his former club at the 11th time of asking – perhaps benefitting from the game being at Wembley where he has flourished in front of goal.

The tables were turned in the second half as Liverpool dominated but could not level as they hit the crossbar and post with efforts, while Sterling fluffed his lines to miss a sitter to kill the game for City.

Salah had a couple of excellent late chances to win the game, wasting a fine shooting opportunity by dragging a shot wide of the near post, before the most dramatic of clearances denied him a certain goal.

The Egyptian should have done better in truth with a one-on-one with Bravo, but after the ball rebounded up he nodded towards an empty net, only for Walker to come from nowhere with a flying bicycle overhead kick from under his own bar.

It summed up City’s hunger to win the game, despite being clearly second best in the second half, and after making it to penalties they put away their five spot kicks expertly.

Liverpool also took four excellent penalties but Wijnaldum’s second penalty for Liverpool was by far the worst of the ten and Bravo easily palmed it away to give the champions the advantage.