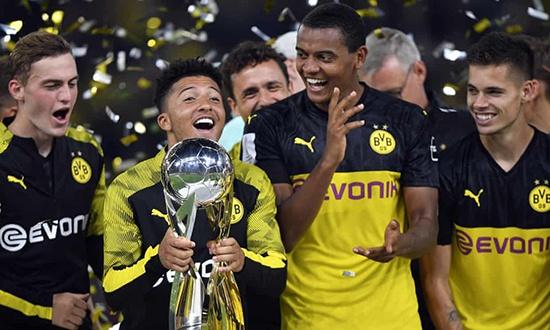 The England winger was at his tricky best in the second half at Signal Iduna Park, brilliantly setting up Paco Alcácer for the opener before sealing victory after a dazzling solo run.

Dortmund are bidding to end Bayern’s seven-year reign as German champions, but were unable to field summer signings Julian Brandt and Thorgan Hazard because of injury, although defender Nico Schulz did start.

Mats Hummels was also absent against his former club, but after a goalless first half, the hosts took the opportunity to deliver a statement of intent for the season ahead in front of more than 81,000 fans.

The opening goal came in the 48th minute, Sancho twisting and turning away from a clutch of Bayern defenders before playing the ball across the edge of the penalty area to Alcácer. The Spanish forward struck a low shot that beat Manuel Neuer at his near post.

As Bayern pushed for an equaliser Sancho struck in the 69th minute, collecting a pass on the right flank just beyond the halfway line and racing clear of the Bayern defence, before slotting the ball past the advancing Neuer.

The new Bundesliga season begins in two weeks’ time, with Bayern hosting Hertha Berlin on Friday 16 August and Dortmund playing Augsburg the following day. The two rivals meet in the league on 9 November at the Allianz Arena.