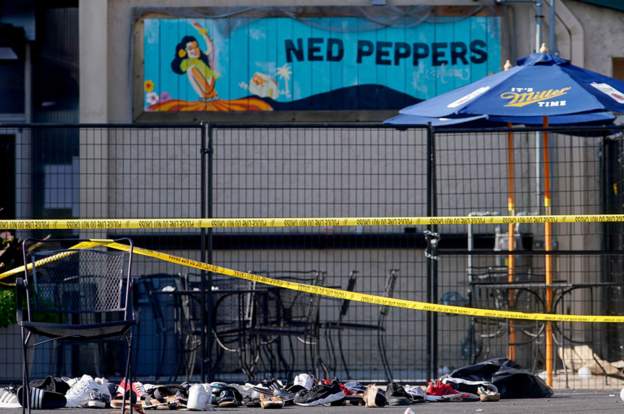 Donald Trump faced a barrage of criticism on Sunday as the US reeled from a brutal mass shooting in the border city of El Paso, Texas, on Saturday – linked to white nationalism and anti-immigrant hate rhetoric.

A total of 20 people were killed in the majority Latino city, nestled in western Texas on the US-Mexico border, as federal authorities investigated a potential hate crime and local prosecutors charged a 21-year-old white man with murder and said they would pursue the death penalty.

Police apprehended a 21-year-old white male suspect, from the town of Allen 650 miles from the site of the shooting, at a busy Walmart in the city.

Less than 13 hours later another mass shooting took place in the city of Dayton, Ohio, leaving nine dead there and bringing the total injured from both shootings to at least 52.

Authorities had not yet officially named the suspects in either shooting, but local law enforcement sources in El Paso named the shooter there as Patrick Crusius. Police were also examining a hate-riddled message on the website 8chan, posted around 20 minutes before Saturday’s attack, in which the author expressed sympathy for a white nationalist massacre at mosques in Christchurch, New Zealand, a few months ago, and which stated: “This attack is a response to the Hispanic invasion of Texas.”

By late Sunday morning, the US president, who is spending the weekend at his golf resort in Bedminster, New Jersey, had not addressed the nation in person, sending a few short tweets decrying the massacre in El Paso as “tragic” and “an act of cowardice”.

But leading Democrats in the field for the 2020 presidential nomination rounded on the president, linking the anti-immigrant rhetoric that characterized both his 2016 campaign and his tenure as president to the potential hate crime.

The former Democratic congressman from El Paso, Beto O’Rourke, labelled Trump a white nationalist and accused the president of encouraging attacks like those in El Paso.

“We have to acknowledge the hatred, the open racism that we’re seeing,” O’Rourke told CNN, adding: “There is an environment of it in the United States.” He also decried the wide availability of high-powered firearms.

Meanwhile, US senator from New Jersey and rival Democratic 2020 presidential candidate, Cory Booker, told the news channel: “He [Trump] is responsible for what is going on and is doing nothing to stop the carnage and chaos.” Booker added: “This is a moral moment and he is failing this nation.”

Julián Castro, the former mayor of San Antonio in Texas and another 2020 runner, said: “There is no question that this president is setting a tone of division and fanning the flames of bigotry and hate. It’s not making it any better. It’s making it worse.”

Some state officials in Texas have been quick to link the attack in El Paso to acts of domestic terrorism. The state’s land commissioner, George P Bush, grandson of president George HW Bush, said in a statement: “There have now been multiple attacks from self-declared white terrorists here in the US in the last several months. This is a real and present threat that we must all denounce and defeat.”

But the Trump administration’s justice department has yet to make the link, with US attorney general William Barr issuing a short statement on Saturday calling for the individual shooter to be “held accountable swiftly and to the fullest extent the law allows”.

Last month the FBI director, Christopher Wray, told Congress that the majority of domestic terror related arrests since last October had been linked to white supremacist violence. While the Southern Poverty Law Centre, a non-profit group tracking hate organization in the US, reported a surge in white nationalist groups last year.

The massacre in El Paso began on Saturday morning, at the Cielo Vista Mall, a sprawling shopping centre close to the city’s airport. The gunman entered a Walmart in the centre and opened fire with a military style assault rifle. Authorities believed about 3,000 shoppers were present in the centre, ahead of the start of the new school year.

An El Paso police spokesperson, said the suspect was eventually apprehended after complying with officer’s demands. Prosecutors on Sunday said they would pursue the death penalty.

At an emotional news conference on Sunday morning at the Del Sol medical center Dr Stephen Flaherty, medical director of trauma, said the hospital was treating 11 of the 26 injured in the attack. The patients ranged from 35 to 82 years old, with eight in a stable condition, and that three remained critical.

“It was a long night. It was a long day,” Flaherty said, adding, “It’s incredible how people came from home on their days off, dropped whatever they were doing.”

Outside the hospital mourners had erected bright signs that said, “No hate can ruin our great city” and “Our city is pure love.”

In Dayton, Ohio, a majority-white city at the heart of America’s rustbelt and 1,500 miles from El Paso authorities were also delivering details of a mass shooting that occurred in the early hours of Sunday morning at a busy downtown bar.

The shooter in Ohio was dressed in body armour and opened fire with an assault style rifle using high-calibre ammunition. The gunman has not been named by authorities and was shot dead by police within a minute of the attack taking place. The shooting also left 26 injured.

Local law enforcement sources told CBS News the shooter was 24-year-old Connor Betts from the nearby town of Bellbrook. There has not yet been a motive ascribed to the shooter.

The city’s mayor, Nan Whaley, described the shooting as “a terribly sad day for our city”. On Sunday morning she confirmed to CNN that she had not received a phone call from the president.

The shooting in Ohio marked the 31st deadly mass shooting in America this year, defined as those where at least three people are killed by gun violence in a single episode.