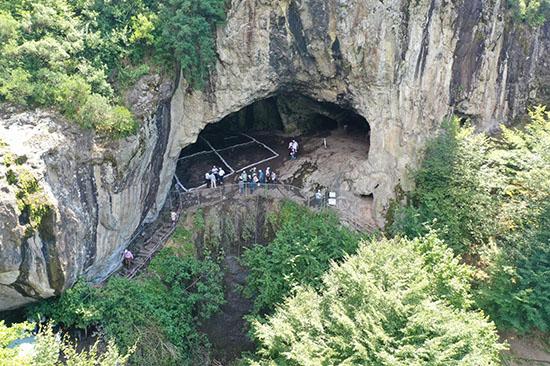 Archaeological excavations carried out in İnönü Cave in Ereğli district of the Black Sea province of Zonguldak, revealed findings from 6,500 years ago. Hamza Ekmen, the head of the excavations said that they obtained information that the cave and the region were the first settlement of the Black Sea.

In the excavations, carried out by Bülent Ecevit University (BEU) Archeology Department, the first settlements of the Black Sea region and the first finds belonging to the Hittite period were discovered as well as the first wooden historical findings in Anatolia. Excavations in the cave, remains of the Middle Ages, Balkan tribes, the Hittite Empire and the Early Bronze period were identified.

“Many firsts can be found in this excavation. This is the oldest settlement in the Black Sea.

Önder Bilgi, who carries out excavations in the Black Sea province of Samsun’s İkiztepe, used to say that it was the most systematic settlement. When we told about this place at a symposium, he was surprised. This will be the reference point for anyone who studies the Black Sea and Thrace archeology. This place was a first.”

Ekmen said that among the remains found in the excavations were of the same period as Yassıkaya findings, and explained: “The findings are in line with those found in the Aegean region, Bulgaria and the Balkans. The periods are similar, too. We estimate that they made cultural exchanges using the sea route. We are examining the remains in the cave. The caves can often be used as camping sites in summer, but these cultural strata show that three or four families lived here all year round. It also has a strategic position. The choice of such a position 6,500 years ago shows that it was a serious culture. The construction of a pottery oven shows that there was a settled community here. We found so many seeds in the cave; they are the seeds of lentils, wheat and barley. We can define them. They were carbonized.”

Ekmen said that the cave was consisting of three different sections, and continued:
“The A section where we are has never been accepted as a settlement in any archaeological period. People settled in B and C sections. This may be due to the fact that they were better able to observe in these sections or spring water coming from the bottom. When we discovered the first cave in 2016, we conducted a surface survey and realized that we should focus on the C section. None of the visible surfaces of the cave are natural surfaces. There treasure hunters created cavities with dynamites. They used dynamite thinking that there was treasure. Until this time, people made paintings on the walls. Because of this dynamite explosion, we may have lost some of the figures on the walls. The wide cavity on the opposite side was also exploded with dynamite. In addition, pipes were installed to carry water down the cave, which damaged the remains.”

Ekmen said one of the most interesting finds in the caves were wood planks that the Hittites used for flooring inside their dwellings, according to some tests conducted by the Scientific and Technological Research Council of Turkey (TÜBİTAK) on samples of the wood.

“Next year when we dig here, we will understand the tradition of wood [flooring] here. We found many metalware and flintware from the Hittite era here,” he said.

Another interesting find was the first concrete evidence of a raid group called the Kaskians. There were historical references to the group but no remains from any settlements.

“For the first time we found the remains of Kaskians in this cave,” Ekmen said.

Ereğli Mayor Halil Posbıyık said that the excavations took the history of Ereğli 6,500 years back and shed light on its past.