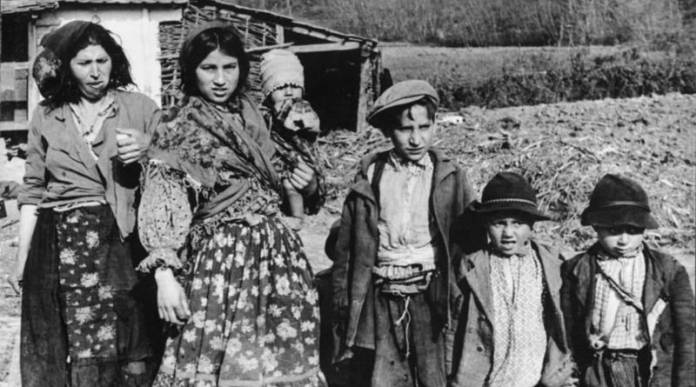 On International Roma Genocide Remembrance Day, historian Danijel Vojak tells BIRN how thousands of Roma were persecuted and killed by the Nazis and their Croatian allies – and how one 11-year-old Roma boy’s disappearance highlights the crimes against his people.

Danijel Vojak, a historian from Zagreb-based Ivo Pilar Institute of Social Sciences, is recalling how he once found an old photograph of an 11-year-old Roma boy called Stjepan Mavrovic, whose childhood was disrupted in June 1942.

Young Stjepan and his family, who lived in Stupnik in the Zagreb area, were photographed by police officers when they were detained and then sent to Jasenovac, a concentration camp run by Croatia’s World War II-era Nazi allied Ustasa movement.

“All traces of him were lost [in the Jasenovac camp],” Vojak told BIRN in an interview.

Stjepan Mavrovic is not on the list of the victims of Jasenovac, but Vojak said that he has information that most of his family disappeared after being put in the camp.

“He was 11 years old, he did nothing to anyone, their property was set on fire and plundered by the peasants there, and it is very likely later that [the property] went to someone more ‘eligible’ and not to the Roma people,” he added.

After the war, there were no longer any Roma in Stupnik, where the Mavrovic family had lived.

During World War II, Roma people were targeted by the racial laws of Nazi Germany, but also – together with other ethnic groups like Jews and Serbs, and also anti-fascists – by the fascist Ustasa movement which during the war installed the Independent State of Croatia, NDH, a Nazi puppet state.

Every August 2 since 2012, the Croatian Roma community has commemorated International Roma Genocide Remembrance Day, or the Samudaripen (“Mass killing”), with a commemoration in the village of Ustica, where the so-called ‘Gypsy Camp’ was located during WWII – part of the Jasenovac camp system.

Vojak, who has been working on Roma history for 17 years, said that the date was chosen because on August 2, 1944, a group of around 3,000 Roma were killed by the Nazis at the Auschwitz concentration camp.

Many Roma on the territory of Independent State of Croatia shared the same fate as young Stjepan.

After the Axis powers invaded Yugoslavia during WWII, the Ustasa movement, modelled largely on the German SS, proclaimed its Independent State of Croatia on April 10, 1941. It then started rounding up and killing Jews, Serbs and Roma, along with anti-fascists.

Vojak said that Ustasa-led government didn’t know how many Roma people live on its territory, so during the summer of 1941 it conducted the census of the Roma population and the following year, in May 1942, decided to deport all Roma to Jasenovac.

“From May 19 [1942] until the end of summer, NDH [territory]… was emptied and most of the Roma ended up in the Jasenovac concentration camp,” he said.

According to the Jasenovac Memorial Site, the Ustasa killed over 83,000 Serbs, Jews, Roma and anti-fascists at the camp between 1941 and 1945.

Vojak said that the exact number of Roma victims is difficult to establish, but the estimate is between 15,000 and 30,000.

“I would point out that the Ustasa authorities committed genocide against the Roma population in the NDH, which is evident not only by the numbers, but also by the way in which they treated Roma and the procedures [they used],” he said.

“They were being dragged to the camps without their first and last name [registered]; they were killed there. Some were sent to do forced labour,” he continued.

The historian said that Roma people’s property, which was not as meagre as is usually perceived, was systematically confiscated, and after the Roma were deported to the camps, their property ended up at public auction, where it was purchased by their fellow citizens.

“Not all Roma were poor; on the contrary, there were extremely rich Roma. Their land, their houses, their animals, which they legally acquired were systematically stolen,” he said.

He cited a 15-page auction record preserved in the Croatian State Archives, in which “we can see how Roma property was systematically captured and how the local population participated in such theft”.

“The continued terrorising of the Roma population did not stop at the boundaries of the Jasenovac camp, [but] it was also [happening] outside… Very little is known about this, because we have very few archived documents,” Vojak said.

“About Roma you [only] have snippets, traces in those documents which you need to read very well,” he said, adding that more than 70 years have now passed since WWII and that there are few witnesses still alive.

Vojak who is also one of the authors of a recently published book entitled ‘Roma in the World War Two and in the Independent State of Croatia, 1941-1945’, which is intended to help teachers to explain the topic to their pupils.

“Unfortunately, the Roma victims of the WWII genocide have been neglected and reduced to just a few words in history textbooks – [something like] ‘they were killed too’ – and children and even their parents do not know what happened to the Roma in WWII,” he explained.

Amid the current trend towards historical revisionism about WWII in Croatia, several books have been published that have downplayed the Ustasa’s crimes and the number of victims who died at Jasenovac. Some of them argued that Jasenovac was not a concentration camp but a labour and punishment camp for enemies of the Croatian state.

“So-called revisionists are often not so brave and open when it comes to talking about the Roma – they somehow take a step back and say that is a topic that has not yet been sufficiently explored,” Vojak said.

“Other revisionists, other fellow historians who are on the revisionist thinking track, they say that almost no Roma suffered, that Jasenovac was a wonderful place where the Roma were taught, among other things, how to live, how to behave, how to be civilised,” he added.

Vojak said that after WWII, there was not much talk about Roma victims of the Holocaust – both in socialist Yugoslavia and in the rest of Europe.

“What happened after WWII in what was then socialist Yugoslavia was the concept of submerging the Roma and other victims into the [blanket] phrase ‘victim of fascist terror’,” he said.

But he argued that Roma victims were also marginalised in West Germany after the war, with courts only starting to rule in their favour in the early 1960s. German Chancellor Helmut Schmidt officially recognised the Nazi genocide of Roma and Sinti people for the first time in 1982.

Vojak believes that the question of reparations for Roma victims of the Holocaust must be considered.

“I advocate that Roma victims should be compensated throughout Europe, in Croatia as well. In what way, this has yet to be agreed,” he said.

In 2012, German Chancellor Angela Merkel opened the Memorial to the Sinti and Roma Victims of National Socialism  in Berlin – a dark, circular pool of water surrounded by plates on which are written the names of the camps in which Roma people were killed, among them Jasenovac.

But Croatia only has few small memorials that commemorate Roma victims.

In April this year, Croatian Roma ethnic minority MP Veljko Kajtazi announced that a memorial centre will be built in Ustica that will be dedicated to Roma victims of the Ustasa.

Vojak said he supports the idea, but argued that Croatia’s capital, which has a larger population and more visitors, needs a similar memorial centre too.

“Jasenovac is far away from Zagreb; it is poorly visited, unfortunately, and I am afraid that the memorial centre will be poorly visited as well,” he said.

“We need education and memorial centres so that we can say, after 70 years, that they are no longer forgotten victims but that they are victims about whom more is known now.”