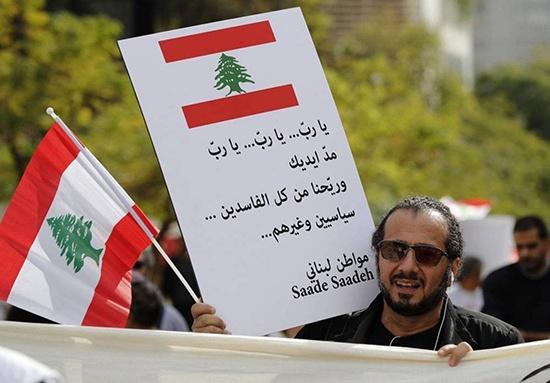 For one thing, it’s not effective. A large chunk of the students’ parents earn their incomes in Lira, thus, in a devaluation, the tuition would rise astronomically compared to their incomes, and a lot of students would drop out.

Lingchi (凌遲) is a form of Chinese torture, in which the torturer inflicts a large number of small cuts on the victim. Any one of these cuts would be a minor inconvenience, normally, but a thousand of them are fatal.

I’m referring here to the black market in Lira, outside the peg band, that’s been popping up all over the place, and has been measured at 1520-1545, with the average probably around 1535.

The official band for the peg is 1500-1515. What was really funny is a few weeks ago when I was sitting in a coffeeshop in Hamra Street, a hundred meters from the central bank, and the door-to-door Sarraf “Abou-Ali” was changing currencies for people sitting next to me. He was selling dollars at 1540. I asked him if the central bank — and I pointed behind him — knows the price he’s trading at. I won’t tell you what he answered because my editor (who’s a bit too serious for my taste, frankly), would take it out. What I can say is that Abou-Ali used words in the same sentence that you would never imagine go together.

Yesterday, a major university reportedly decided to start billing students in US dollars instead of Lira. I’m not sure why they made that decision — I can’t imagine their having a bunch of foreign exchange analysts examining moving averages, deciding that the Lira is toast, and hedging it by changing all their billings suddenly.

For one thing, it’s not effective. A large chunk of the students’ parents earn their incomes in Lira, thus, in a devaluation, the tuition would rise astronomically compared to their incomes, and a lot of students would drop out. Of course, some parents work overseas, earning their salaries in hard currencies, so would be unaffected by this change … or would they? I call this the Corvette versus Porsche syndrome. Let’s say that both cost $100,000 and each sell 1,000 cars per year in Lebanon. If the Euro doubles in value like it did in the years 2002-2008, going from 85 cents to $1.60, assuming that the Porsche doubled in price to $200,000, there’s no doubt that even die-hard Porsche lovers would switch to the Corvette. Maybe at $120,000 they’d remain loyal, but at some price point, say $150,000, most would defect to Corvette.

Maybe Corvette would then sell 1,400 cars and Porsche 300 cars. This is called the substitution effect. It’s the same reason why when housing in Rabieh, which is widely perceived as the Beverly Hills of Lebanon, became too expensive, people bought next door in Biyyada. When Biyyada became too expensive, they bought in Dik el Mehdi, and so on, all the way up the mountain. In the case of a university, you may believe that the University of Porsche is better than the University of Corvette, and pay a 20% premium, but if the premium goes to 300%, you’re just going to attend the University of Corvette.

So what’s the probable reason they did this? My guess is that they have a lot of suppliers that started to demand dollars or Liras at a rate of 1535-1550, and no longer getting the rates they were used to (1,514 or so) at their bank. An exchange rate of 1530-1550 means losing 1-2% of their revenue, not a huge amount, but if you’re the CFO, you’d be really annoyed, plus, it’s your job to minimize costs. Maybe their bank started to demand that they pay their dollar credit cards in dollars, not in Lira (like they were used to). In other words, despite their privileged position, they’ve started to experience similar problems to the typical person.

I’m guessing that at the last management meeting, the CFO suggested it — it seemed innocent enough — and the motion was passed. In fact, many companies made similar decisions over the last few months, like switching their employee salaries from dollars to Lira; or banks calling you up to convince you to switch your Lira loan at a high rate to dollars at a zero rate. Not too many people noticed or wrote about these few dozen small cuts, but this case was different.

The signaling effect coming from this particular institution, on the fragile Lebanese psyche, is humongous, because it’s one of the largest and most venerable institutions in the country. There’s also another reason — the fact that it’s an American institution would cause a chunk of conspiracy theorists to reason that the CIA had a meeting in Langley and predicted the imminent devaluation of the Lira and passed this “inside information” to their institution here. Clearly, this scenario is nonsense, but that doesn’t matter, because perception is reality.

Either way, here’s what I expect. They’ll get a call from the central bank or ministry of finance first thing on Monday morning, and in a very polite, but stern fashion, they’ll be told, “These are very sensitive times and our monetary situation is precarious. We can’t have an institution as prestigious as yours sending such a strong negative signal.” They’ll probably have to recant the memo, in return for assurances that they can buy as many dollars as they want at 1514. Alternatively, they could be told to not insist on dollar billings, but to raise the tuition slightly to compensate for the higher rate.

We haven’t reached a thousand cuts yet, but this one has to be stitched immediately — it wasn’t a cut — it was a gash.