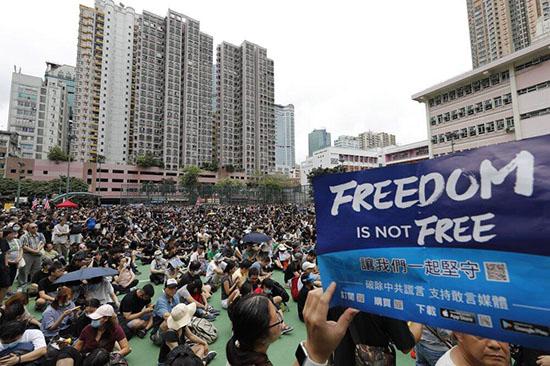 Hong Kong protesters ignored police warnings and streamed past the designated endpoint for a rally on Aug. 3 in the latest of a series of demonstrations targeting the government of the semi-autonomous Chinese territory.

“Strike on Monday!” the protesters shouted as they filled the roads in a usually bustling market district, referring to demonstrators’ calls for a citywide shutdown. Shop owners shuttered their storefronts in anticipation of a prolonged demonstration.

The street along the route was completely filled with protesters, while other roads were reduced to single lanes. One black-clad protester directed traffic for a line of taxis attempting to get through. Some passing drivers honked their horns and yelled words of encouragement, eliciting cheers from the crowd.

Police warned earlier in the day that those who continued past the pre-approved route would be breaking the law. They called on protesters to stick to designated routes and times after violent clashes marred previous rallies in the summer-long protest movement.

Police held a briefing Aug. 3 ahead of the scheduled rally in Mong Kok, a bustling shopping district with a history of hosting pro-democracy protests. Any demonstrations that are not pre-approved will be “cleared out” as unlawful assemblies, police said.

A 44-year-old nonprofit worker surnamed Wai said he was worried about protesters’ safety because violent incidents have often occurred after marches draw to a close.

“Some things have gone too far,” Wai said. “Hong Kong’s future belongs to all of us. We need to keep it safe.”

The summer-long protests began in opposition to a contentious extradition bill, but have continued despite the government’s decision to suspend the legislation that would have sent some suspects to mainland China for trial.

While the rallies have been largely peaceful, they have increasingly devolved into skirmishes with police after some protesters refused to disperse at assigned times. Since the rallies began in early June, protesters have vandalized buildings and thrown bricks, while police have fired tear gas and rubber bullets.

A former British colony, Hong Kong was returned to China in 1997 under the framework of “one country, two systems.” The city’s mini-constitution promises the city certain freedoms not afforded to those in the mainland, but Hong Kongers say Beijing has chipped away at their autonomy in recent years.

Several thousand civil servants and their supporters crowded into a public park on Aug. 2 evening to show solidarity with the movement, which has broadened to include demands for direct elections and an investigation into alleged police brutality.

Hong Kong residents have accused police of negligence after 44 people were injured last month in a mob attack that appeared to target protesters. Authorities said their resources were stretched due to the prolonged demonstrations.

In a separate demonstration on Aug. 3, people dressed in white gathered at a Hong Kongpark to express their support for the police.

Mong Kok, the site of Aug. 3’s pro-democracy protest, was one area where protesters set up a pro-democracy demonstration zone in 2014. Near the end of the Occupy Central protests, police officers descended on the site and tore down the metal barricades, bamboo and wooden planks protesters had used to block off key streets.