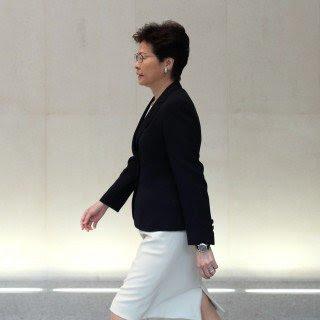 Hong Kong’s embattled pro-Beijing leader on Monday accused pro-democracy protesters of trying to “destroy” the financial hub in a dramatic escalation of rhetoric as the financial hub is rocked by two months of rallies and clashes.

“We saw recently, it is already clear that people are impertinently proposing to ‘reclaim HongKong, a revolution of our times’… and challenge the country’s national sovereignty,” she said, referencing the now most commonly-heard chant used at demonstrations.

“I dare say it is trying to topple Hong Kong, completely destroy the cherished lives of more than seven million people.”

More than 200 flights were canceled in Hong Kong on Monday morning with airport authorities warning passengers of potential disruption, as pro-democracy protesters kick off a city-wide strike.

Operations at Hong Kong International Airport have been hit severely as one-third of air traffic controllers have joined the ongoing anti-extradition bill protest.

One of the busiest airports in the world has drastically reduced its flight operations and using just one runway from the usual two.

The Airport Authority warned that the planned strike might affect not only airlines but airport operations.

It advised passengers to check with their airlines for the latest information, and only proceed to the airport when their seats and flight time have been confirmed.

City check-in desks for the airport rail line were disrupted earlier because of the strike.

When contacted, an airport spokesman did not give any reason for the cancellations but said passengers should check to see if their flight was departing.

“The Airport Authority advises passengers to check with their airlines for the latest flight information, and to proceed to the airport only when their seats and flight time have been confirmed,” the airport said in a statement.