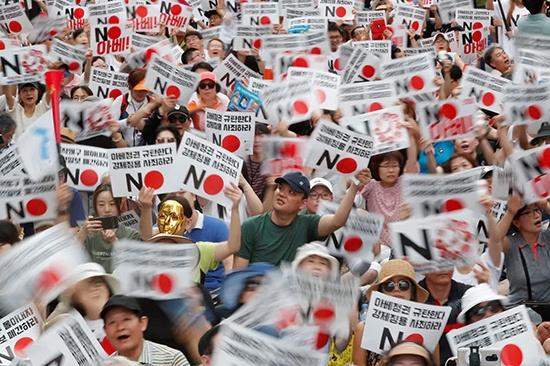 SEOUL (Reuters) – South Korea on Monday announced plans to invest about 7.8 trillion won ($6.48 billion) in research and development for local materials, parts and equipment over the next seven years in an effort to cut the reliance on Japanese imports.

The move comes after Japan on Friday dropped Korea from its “white list” of countries with fast-track export status, intensifying a row over wartime forced laborers..

In July, Japan tightened controls on the export of materials used to make chips, South Korea’s top export item, which threatened to disrupt global semiconductor supplies used by tech giants such as Apple and Huawei.

“We want to turn the crisis into an opportunity for the materials, parts and equipment industry,” South Korea’s industry minister, Sung Yun-mo, said at a press briefing.

South Korea plans to raise “self-sufficiency” for 100 key components, materials and equipment items used to make chips, displays, batteries, automobiles and other products, with a goal to stabilize supply over the next five years.

The plan aims to “address structural weakness in South Korea’s materials, parts and equipment sector, which heavily depends on a particular country,” the government said in a statement.

In a 51-page statement, South Korea also laid out a number of measures, including financing support of over 2.5 trillion won for overseas acquisitions.

Japanese officials have cited unspecified security reasons for the export curbs to South Korea. But they have also pointed to an erosion of trust after South Korean court rulings last year ordered Japanese firms to compensate wartime forced laborers, a matter Tokyo says was settled by a 1965 treaty normalizing bilateral ties.